How To Unlock All Attack on Titan 2 Outfits 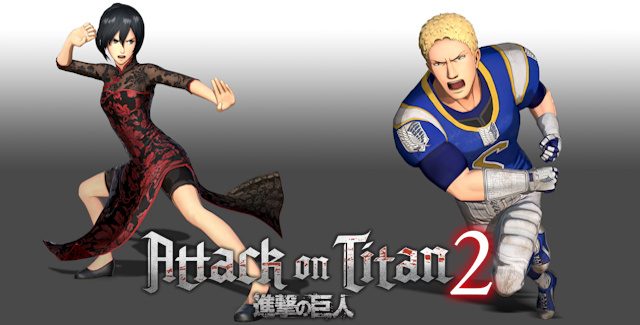 Watch the overview below to see all Attack on Titan 2 Unlockable Outfits.

Index of Attack on Titan 2 Guides:

Let’s take a look at all unlockable Attack on Titan 2 outfits AKA alternate costumes AKA character skins in the game.

How To Change Outfits In Attack on Titan 2: Pause the game, from the pause menu select “Change Outfit”, then go to the outfit / clothing to change it out or adjust its colors.

The following guide explains how to get all Attack on Titan 2 Outfits that were part of the pre-order bonus DLC for all platforms.

• Those who purchase the game digitally on PlayStation 4, Xbox One, Nintendo Switch or PC via Steam within four weeks of the game’s launch will receive a bonus pack of plain clothes costumes for Eren, Mikasa, Armin and Levi.

Outfits Video: Product and promotion information covered in this hour-long official Tecmo Koei video is for the Japanese version and may not apply to versions sold outside of Japan.

Attack on Titan 2 will have plenty more DLC Outfits following its release as part of the PS4 / Xbox One $100 Deluxe Edition or individually at $3 each.

Thanks to Gamecity & Koei Tecmo for the outfit tips.

Do you know of any more Attack on Titan 2 outfits? This should be close to all of them, but please leave a comment with a the tip for how to get it if there are more. We’ll update this outfits page and give you credit for the discovery!