Square Enix announced that the PC players can now explore the captivating and magical world of Ivalice, as Final Fantasy XII: The Zodiac Age is now available on PC.

After over a million units of Final Fantasy XII: The Zodiac Age shipped last year for the PlayStation 4 computer entertainment system, the game is now available on Steam with all of the modern advancements and features available in the PlayStation 4 version. Alongside the latest-generation visuals, a remastered soundtrack, new Speed and Trial modes, fast forward function, and many other enhanced features, the following new features are also added for PC users:

• New Game Plus and New Game Minus – Post-game content modes are now accessible from the beginning of the game.

• Three background music options – The original, re-orchestrated and soundtrack versions are now available from the beginning of the game. 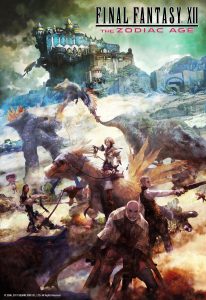 To celebrate the launch of Final Fantasy XII: The Zodiac Age, fans can purchase the game from today until 8th February for the discounted price of just £27.99 / €39.99, which also includes a bonus three-track digital music compilation and a new Steam Skin illustrated by famed Final Fantasy artist Isamu Kamikokuryo. After 8th February, the game will be available for £34.99 / €49.99.