PlayStation Plus Games for January 2018 Announced 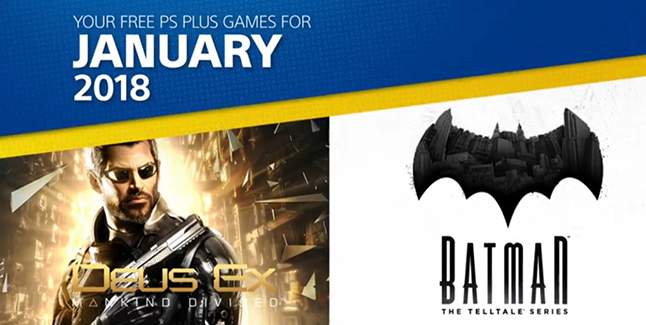 Sony Interactive Entertainment has announced the January 2018 lineup of free games for PlayStation Plus subscribers.

Check Out the PlayStation Plus “Free Games Lineup January 2018” Trailer:

Between all the new games Santa dropped down the chimney this week and the hundreds of sweet deals currently available in the PlayStation Store January Sale perhaps you figured you had enough games to be getting on with. Well, perhaps, but it is the season of excess – so here are a few more for you to get stuck into.

Brought to you by a voice so rough and gritty it makes even sandpaper blush, we have the continuing adventures of Swiss army security specialist Adam Jensen.

Hot off the back of his adventures in 2011’s Deux Ex: Human Revolution, the ultra-augmented corporate henchman returns to Prague as tensions between humans and ‘augs’ reach boiling point.

Building on the hybrid stealth-action gameplay of the original, Deus Ex: Mankind Divided holds true to its gritty tech-noir roots, taking a Jensen (with all his trademark reluctance) through another explosive story of corruption, greed and subterfuge.

Sticking closely to the theme of brooding antiheroes who’ve got more needless gadgets than an Amazon wish list, we have the big man himself: Bruce Wayne.

Taking on the alternating roles of billionaire playboy and caped crusader, work to uncover the culprit behind an escalating tide of crime that’s gripped the city, contending with familiar foes like Catwoman and The Penguin as you prowl the night.

Told in five successive episodes, the outcomes are dictated by how you choose to play: cowled avenger or charismatic businessman, there’s more than one to be the Batman.

PS Plus Bonuses: StarBlood Arena and That’s You!

StarBlood Arena places you inside the cockpit of a miniature battle pod and invites you to test your mettle in a lawless competition where only the most skilled pilots earn a shot at intergalactic glory.

Developed exclusively for PlayStation VR, StarBlood Arena places you at the centre of the action, trading shots with your enemies in a wide open arena that allows for 360-degrees of movement. Take part in Carnage deathmatches, Team Carnage deathmatches for up to four players, or Invaders co-op mode – everything you do will earn you glory, credits and a shot at intergalactic fame.

As with months previous, PlayLink title That’s You! will also continue in the monthly line-up for those of you who haven’t had a chance to grab it yet.

An irreverent party quiz for you and up to five friends or family, That’s You! invites players to find out what they really think of each other. With your TV, PS4 and a tablet or smartphone in hand, answer over 1,000 funny questions, take part in daring doodle challenges, snap selfies for photo challenges and more.

Yup, just like always, January’s line-up will be rounded off with two additional titles each for PS3 and PS Vita. The final rundown is as follows:

All the above (except for That’s You, which is available to download now) will be available on PlayStation Store from 2nd January.