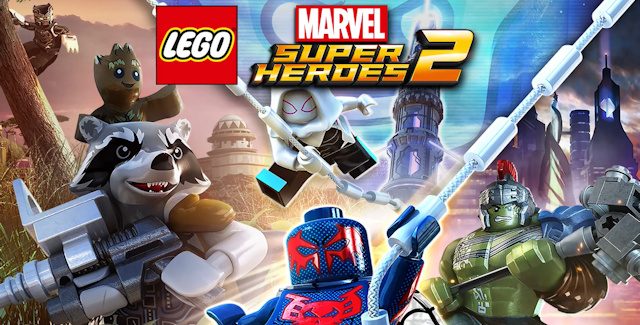 Our 100% Lego Marvel Superheroes 2 walkthrough will guide you through the beginning to ending moments of gameplay with strategy tips for this action-adventure game on the PS4, Xbox One, PC & Switch.

Lego Marvel Superheroes 2 is rated PEGI 7 in Europe & ESRB E10+ in America for everyone 7 to 10 years or older. This game includes Cartoon Violence.

If you need help anywhere, check the FAQ section, or please comment below!

LEGO Marvel Super Heroes 2 is an all-new, original epic adventure and sequel to the smash hit, LEGO Marvel Super Heroes. Bringing together iconic Marvel Super Heroes and Super Villains from different eras and realities, this original branching storyline transports players into a cosmic battle across a myriad of Marvel locations ripped from time and space into the incredible open hub world of Chronopolis. Packed with signature LEGO humor for fans of all ages, gamers will go head-to-head with the time-travelling Kang the Conqueror through Ancient Egypt, The Old West, Sakaar, New York City in the year 2099, Xandar and many other imaginative settings in this fun-filled journey spanning the Marvel Universe.

Players will go head-to-head with the time-traveling Kang the Conqueror in an epic battle across Chronopolis, from Ancient Egypt and The Old West to Sakaar and New York City in 2099. Along the way, gamers will be able to take control of a host of iconic characters, from Cowboy Captain America from the past to Spider-Man 2099 from the future along with Thor, Hulk, the Guardians of the Galaxy, Black Panther, Captain Marvel, Doctor Strange, Green Goblin, and dozens of other Marvel Super Heroes and Super Villains.

Answer: There are 148 playable characters in the main game. That is, if you’re not counting the 60 downloadable content (DLC) characters announced so far. You can also save up to 10 custom characters using the game’s character creator at the Avengers Mansion’s lab room.

Important Note: Unlocking characters usually involves completing campaign missions, bonus- or side missions, or finding their token card hidden throughout the game levels or overworld map. To find out how to get all the characters in the game, please look at our upcoming “Lego Marvel Superheroes 2 Unlockable Characters Guide”.

Answer: This can only be done while you’re in Free Play mode (it doesn’t work in Story mode). Hold the Triangle button on PS4 / hold the Y button on Xbox One / hold the X button on Switch to bring up the character menu.

Answer: The game will automatically save your progress once you reach the end of a level. Quicksaving is indicated on-screen by the circular Kang logo in the bottom-right corner. If you want to save the game manually, you have to press the Start button get to the pause menu and from there you can exit the game, at which point the game should ask if you want to save and quit… say “Yes” to save.

Answer: None found yet. *fingers crossed* Keep an eye on our upcoming “Lego Marvel Superheroes 2 Glitches” page to see people share new glitches in the comments.

Question: Where is Gwenpool’s room?

Answer: Gwenpool’s room can be found in the Avengers Mansion. In the Mansion’s Foyer, walk up the stairs on the left side to find Gwenpool’s poster on the first floor that leads to her room door. — Her room allows you to access the cheats entering menu via her TV. Also, buying Pink Bricks in his room will unlock new cheats that you can then activate via the game’s pause menu under Extras.

This voice-over guide shows how to walk to Gwenpool’s room. It begins 24:30 minutes into the video:

Question: What are the PC system requirements?

Level 1: No Eson of Mine (Eson The Searcher Celestial Boss Fight)

100% means that using this walkthrough and our location guides (listed above), you will see how to get all characters unlocked, and see where to find all Minikits, Pink Bricks, Gold Bricks, as well as where to rescue all Stan Lee in Peril’s. You are a Superhero after all!

The boss for this first level is a giant Celestial.
Your voice-over guides throughout the levels will be Brian and the Kwings (sounds like a band’s name haha).
Let’s have some family-friendly fun! 😀

With Lego Marvel Superheroes 2 now started, next we’ll be seeing our heroes relax at the Avengers Mansion before taking a trip to Siberia and other places to take on Nick Fury’s next missions.

In the second level we get to play as Team Captain America! They will face off against the eeeeeeeevil radioactive The Presence.
The 2nd part of this level starts underwater with Iron Man & Captain Marvel splitting up from the team.
The 3rd part focusses on our Spider-team with their section boss for this second level being Doctor Octopus. Sounds like a job for the web-slinging Spider-Man and his new The Tremendous Trio team!

How To Unlock/Buy Characters Tip: You can buy the characters you’ve unlocked — by holding the Y button on Xbox One or Triangle button on PS4 or X button on Switch — to bring up the character grid and selecting them to buy them.

In the third level the Guardians of the Galaxy and other heroes have to explore medieval times and take on Black Knight Garrett.

The fourth level is where we get to play as Black Panther for the first time as they take on the next obstacles our villain, Klaw, throws at us in Wakanda; Ending in a Man-Ape boss fight.

In the fifth level we get to play as another odd team up Star-Lord, Captain America and Black Panther. The boss fight on this stage is Klaw, followed by a surprise Baron Zemo dogfight.