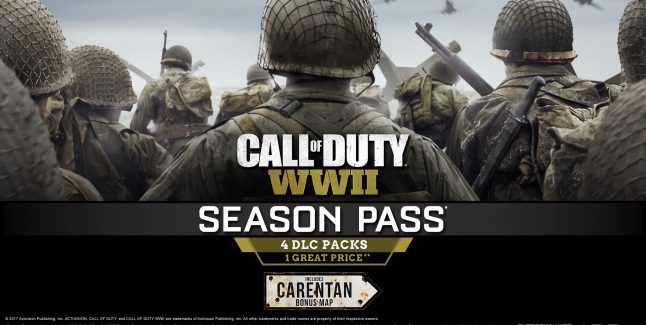 What are the Call of Duty WW2 DLC release dates? Everyone’s asking that question and so far Activision have only confirmed the four action-packed DLC Map Packs in the Call of Duty WW2 Season Pass will be “content available in 2018”, while scheduling the first DLC pack to hit PS4 first on January 30th, 2017 and one month later on Xbox One & PC. NEXT, based on previous years — which we got 100% correct *humblebrag* — we will show you the expected release date for each of the 4 DLC in the list below!

Yet another year where the Call of Duty WW2 DLC will be a timed PlayStation 4 exclusive for the first month. That means the Xbox One and PC releases will follow the next month. – Sorry everyone on Xbox, this year once again Sony was willing to pay more than Microsoft for the month early release of the DLC maps.

Note: The above release dates are not final and subject to delays. We will update this page if the dates change (usually only 1 week later than previous years). We’ll find out more about each Map Pack when we get closer to the first DLC pack’s launch.

The 4 DLC Packs are titled: 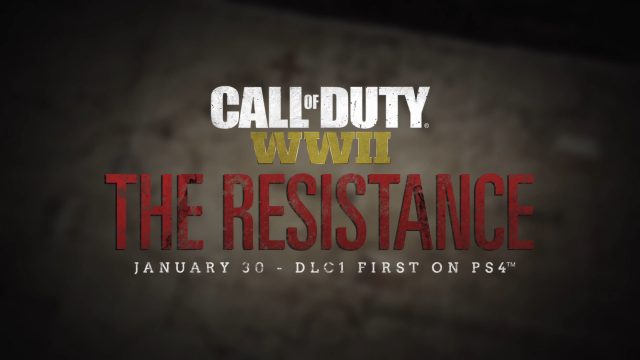 In The Resistance DLC pack, players will fight in iconic World War II locations, from Paris to Prague, all centered around historic uprisings in three new Multiplayer maps and an all-new high-octane War Mode map.

– Valkyrie – Located in the Masurian Woods, East Prussia, this map was inspired by The Wolf’s Lair – The Fuhrer’s Eastern-front headquarters during Operation Barbarossa – the Nazi invasion of the Soviet Union. This is a medium-sized map with multiple overwatch positions and mounted machine guns.

– Anthropoid – Based in Prague, Czechoslovakia, this map is inspired by Operation Anthropoid – the famous assassination attempt on a high-ranking German officer during World War II. This map is divided by a river, with long-flanking paths that can be used by snipers for ranged attacks.

– Occupation – In this remake of a classic Call of Duty® map, players battle through the streets and shops of German-occupied Paris during WWII. Nearby homes and storefronts lend defensive positions for ambush and recovery.

– Operation Intercept – Outside of St Lo, France, the next War Mode experience, developed in partnership with Raven Software, leads you on an urban rescue mission to save Resistance fighters being transported by train. The first objective on the Allied side is freeing the fighters, followed by the destruction of key communication equipment, and ends with stopping a train.

– Pack #2: The War Machine — Includes all-new theatres of war. Players will fight in an iconic World War II battle at Dunkirk, travel to a secret German V-2 rocket facility and push the battle across continents and into Egypt.

Players will also fight alongside their friends and foes in a new War Mode mission, co-developed with Raven Software, called Operation Husky, which includes a new gameplay mechanic – aerial dogfighting! And finally, there’s a brand-new, exciting chapter of Nazi Zombies that takes the Barbarossa storyline to an entirely new level.

– Egypt: For the first time in Call of Duty®: WWII, we’re bringing players to the battlefields of Northern Africa and the Egyptian pyramids. Players fight in and around the ancient ruins at Giza with landmarks that you’re sure to recognise. The map features an interior temple in the centre that heats up during intense Domination matches with more open exterior lanes to either side. There’s something for everyone, as all ranges and playstyles have a place to call home here.

– Dunkirk: Players face off on the sands and beachfront boardwalk of the French sea-side city of Dunkirk. This map features a large, open and dangerous beach area flanked by tight interiors through the buildings lining the beach-front. Sniping can be effective here, though aggressive running and gunning can also pay off, so keep sharp and watch your angles and surroundings to win the day.

– V2: Welcome to V2 – a rocket development and test site located in rural Germany. V2 is a tight, ultra-fast paced map that never lets up for a moment. The launch tower sits at the map centre, providing a focal point and an opportunity to grab an elevated sightline on unsuspecting opponents. Short-to mid-range engagements are dominant here, with fast and furious gameplay throughout – don’t blink!

– Operation Husky: Operation Husky, whose namesake referred to the Allied invasion of Sicily, is centered on an Allied action to retrieve intelligence on the locations of sensitive German targets in the ports of Palermo and Naples. In this exciting new War mode offering, players will gather intel, transmit it to HQ, and then take to the skies to clear the area of enemy fighter planes in order to make way for Allied bombers.

– The Shadowed Throne: The Shadowed Throne brings our heroes into the heart of Nazi Germany to confront a desperate and evil regime. Berlin is burning, and Doktor Straub’s monstrous army is hellbent on purging his city of the Allied invaders. Join Marie, Drostan, Olivia, and Jefferson on their descent into madness in a city warped with terror, blood, and war, as Nazi Zombies steps out from the shadows of history.

– Market Garden: The Market Garden in Call of Duty: WWII is set against the backdrop of Operation Market Garden, one of the largest airborne operations in the European Theatre. This is where you will fight off the Axis advances to try and maintain control of an Allied mansion base.
Set in the Netherlands, this map brings intense tight-quarters combat with gunfights waiting around every corner. What was once an opulent mansion is now in war-torn shambles as flames begin to overtake the structure. In the distance, you can see and hear bombs dropping, while all around you is the evidence of the war.
From the Allied fighter plane downed in the river, to the makeshift field hospital in one of the outbuildings, the team at Sledgehammer Games has put extra care and detail in immersing players into an authentic scene from this moment in the War.

– Stalingrad: Stalingrad, based on the largest confrontation in World War II history, features two main bases located on opposite sides of a war-torn city. Snipers can focus on securing key perches to control the map’s center, while run-and-gunners can sneak through the underground sewers to flank behind enemy lines.

– Operation Supercharge: Named after the Second Battle of El Alamein, Field Marshal Montgomery and the Allied Forces pushed the Germans and Italians to retreat from their last significant defensive position in southern Tunisia. In this all new mission, the Allies airdrop into Tunisia and push into a Nazi-occupied village to capture key supplies, then cripple the enemy by detonating a key transport bridge. They then make the final knock-out blow by capturing entrenched Axis fortifications.

– Nazi Zombies – The Tortured Path: The Allied forces are crumbling under the relentless advance of the Final Reich. General Rideau decides to take one last, dangerous gambit: to personally lead a small, unmarked caravan across the 2,000 miles of smoldering, infested land that stand between Berlin and the Allied-controlled port of Malaga. From there, he and his crew face a treacherous voyage across icy southern waters and U-boat blockades.
His mission? Transport the remaining pieces of Emperor Barbarossa’s legendary sword to the edge of the world. Uncover the lost forges of ancient Thule. Make the sword whole again… and deliver a final death to the Undying.
Experience the all-new Nazi Zombies gameplay, which transports players across three unique and challenging locations, only in the United Front DLC Pack.

As for the Map Packs, Activision promises that the Call of Duty WW2 Season Pass will “give you access to four exciting DLC packs.” And more importantly you can “continue the epic journey with 4 DLC Packs in 2018 that include new and iconic Multiplayer Maps, new chapters of Nazi Zombies, and all-new War Missions. Experience the full-scale theatre of war with the Call of Duty: WWII Season Pass. 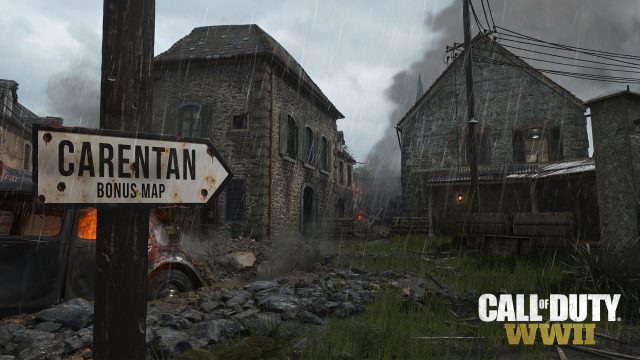 Fans that order the Season Pass will be happy to know it also includes a ‘Carentan’ Bonus Map!

Carentan, one of the most beloved Call of Duty Multiplayer maps, makes its return in Call of Duty: WWII. Fight through the destroyed buildings and fortified streets of this war-torn French town in an all-out battle for a strategic German stronghold. All Season Pass holders will receive this iconic map at launch.

Aside from the Season Pass being available separately, the Digital Deluxe Edition and the Special Edition will also come with the Season Pass, which unlocks access to the four forthcoming DLC multiplayer map packs (in-game) on the day they launch for your system of choice.

Each Map Pack comes with 4 multiplayer maps of its own, and early access to bonus DLC weapons!

Call of Duty WW2 Season Pass holders will get all four DLC’s as part of the $50 / €50 / £35 package, which you can get during the 8 months in 2016 before the final DLC pack comes out. Otherwise, you’ll have to buy each DLC separately at a slightly higher price per DLC ($10 more total), since each one individually will set you back $15. The $10 discount is based on the Season Pass suggested retail price of $49.99 USD.

As always, Call of Duty: Call of Duty WW2 game required to use the DLC content, sold separately.

What maps do you want to see in the Call of Duty WW2 DLC?