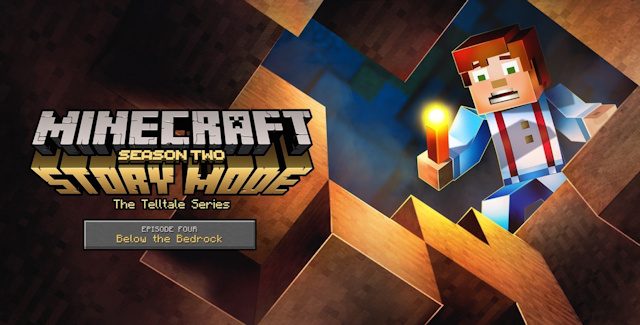 What is the Minecraft: Story Mode – Season 2 Episode 4 release date? Telltale Games has confirmed that Episode 4 (titled “Below the Bedrock”) will be released today on November 7th, 2017. That date is the worldwide Tuesday launch date on PC, Mac, Xbox One, PS4, Switch & Mobile (iOS and Android)!

Episode 4 Synopsis: “Nothing says Halloween quite like the tallest, most terrifying Enderman you’ve ever seen, right? Watch the trailer above to find out what horrors await you as Jesse and the gang try to escape from ‘Below the Bedrock’ in episode four of Minecraft: Story Mode – Season Two, which debuts Tuesday, November 7 across all major platforms!

After narrowly escaping from the Admin’s twisted prison last episode, Jesse and the remaining fugitives discover not just a forgotten city but an entire hidden world buried beneath the bedrock. Though largely in ruin, the gang quickly learns it’s not entirely abandoned, leaving them to win over wary inhabitants, face unexpected challenges, and pursue the real truth about the Admin’s origins…”

The Episode 4 chapter names hint at what events to expect:
• Chapter 1: Behind and Underneath
• Chapter 2: Poetry in Motion
• Chapter 3: A Friend in Need
• Chapter 4: Not What You Expected
• Chapter 5: Out of Time
• Chapter 6: Tougher Than Diamonds

What do you think will happen on the next episode of Minecraft: Story Mode – Season 2?