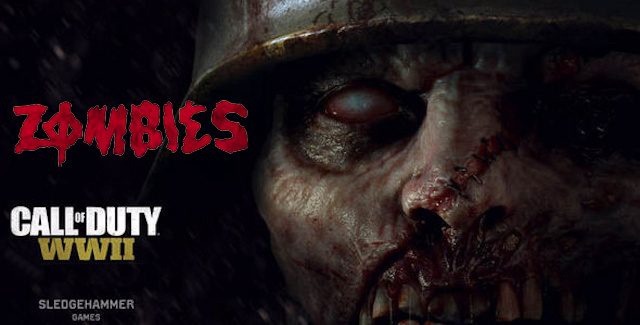 The Final Reich is part of the package for Call of Duty WW2, the first of no doubt 4 more Zombies maps that will follow in the Season Pass.

This is a full guide to complete the The Final Reich zombies map.

Players will embark on a chilling, dark and mysterious journey through a snowy Bavarian village in Mittelburg, Germany, as they attempt to recover priceless works of art stolen by the Axis powers in World War II. This village holds a shadowy secret key to an unimaginable and monstrous power. Beware of the twisted fate and dire consequences from the occult horrors awaiting any visitors.

The main cast consists of these four player characters…

• Jefferson Potts Bio: (played by actor Ving Rhames)
Strong, assured, and educated, Jefferson has both the military and academic prowess the MFAA need.

• Olivia Durant Bio: (played by actress Elodie Yung)
A former art historian of the Musée du Louvre, and weapons expert, she is an extremely savvy and capable member of the team.

• Drostan Hynd Bio: (played by actor David Tennant)
A former art thief, this brash and rough character was given a choice: go to jail, or help reclaim stolen art.

Here’s how to get started in The Final Reich:

Intro: Call of Duty WW2’s Zombies saga begins with “The Final Reich”. Call of Duty: WWII Nazi Zombies is an original, terrifying co-operative mode that unleashes a frightening new horror story for Call of Duty zombies fans. Nothing is as it seems in this zombies horror, as a dark and sinister plot unfolds to unleash an invincible army of the dead.

Tip: Get a good team together of players you can rely on to revive and support you. Good team work is the key to success in Zombies mode. — Still looking for other co-op players? Leave your online username/gamertag in the comments section below and let people know you’re a team player. It’s fun to make new friends. 🙂

Starter Tips: There are a lot of things to explore and secrets to unlock. Here are some basic tips that can hopefully keep you alive a bit longer.

Let’s begin the guide by showing you the first 10 minutes of zombie encounters as an intro to the video guide.

It shows an overview of the map so you know how to survive when you first play it and get your bearings. So you can more easily find the map’s own set of Challenges to complete.

Starts at exactly 2:50 minutes into the video:

UP NEXT: A full The Final Reich walkthrough up to the ending!

Here are all the steps to take to finish the The Final Reich easter egg puzzle:

TUTORIAL #1: How To Unlock The Pack-A-Punch Machine:

The Pack-a-Punch Machine can be obtained after turning on the power*. It is always in the same spot. As well as the mentioned power generator locations on the The Final Reich map.

Requirements: You need money to unlock all barriers and pack-a-punch a weapon. It costs 5000 points to pack-a-punch your weapon. You can also buy ammo for 4000 points at the Pack-a-Punch machine at any time.

– Step 1: Turn on the Power
You do this by turning the 3 valves in the starting area. Then in the middle in of the area you can press a button. Huge flames come through the floor and a few fire zombies will attack. Kill the fire zombies, drop down the hole that was blasted open by the flames and press the generator button down there.

– Step 2: Activate Power Switches in Bunker
Open the Bunker door for 1250 Points. Inside, open the next two doors for 1500 Points each. There are only 2 doors you can open inside, the third door says it doesn’t have sufficient power. Use the crank in the laboratory room of the bunker. Then in the areas through each of the doors is a power switch. You must activate one power switch (press Square) and VERY QUICKLY run to the other power switch (again press Square). If done correctly you have now fully activated the power on all of the map.

– Step 3: Hit the button near the Pack-a-Punch Cage.
From the bunker, head to the bloody basement. It’s flooded with blood and there’s a cage in the middle. Here you can press a button that will lift the cage a little. Pressing this button opens up 3 Disposal Tubes around the map.

– Step 4: Jump through all 3 Disposal Tubes.
They cost 250 each and are small tubes on the walls you can interact with. One is in the bunker, laboratory area where you use the crank. The second is also inside the bunker, in front of the Schildblitz perk. The third is at the tower where you have to defend the lightning rod for the easter egg. Each tube brings you back to the Pack-a-Punch Room. After exiting each tube you’ll be standing in front a button. Press those buttons (they are all in the Pack-a-Punch room but only accessible after using each tube). – Once you’ve gone through all 3 tubes and pressed their buttons the Pack-a-Punch Machine is unlocked.

• A short guide showing you how to find the Pack-a-Punch Machine and the power switches in The Final Reich.

TUTORIAL #2: Where To Get All 10 Perk Locations:

The 6 perks can be obtained after turning on the power on The Final Reich. They are always in the same spot.

TUTORIAL #3: How To Get & Upgrade your Tesla weapon with an Elemental Effect:

The 4 Elemental Upgrades can be obtained after turning on the power on The Final Reich and unlocking the Pack-A-Punch Machine. They are always in the same spot.

• Short guides showing you where to find the Elemental Upgrades in The Final Reich.

TUTORIAL #4: How To Unlock The Mystery Box & Lantern Locations Guide:

The 10 Lantern locations that unlock the Mystery Box in the Prologue / Groesten Haus. They are always in the same spot.

• Short guide showing you where to find (to shoot) the Lanterns in The Final Reich Prologue (Survival Map).

Finding the start of the main Easter Egg quest and lists the requirements to complete it 100%.

– Step 1: Turn on the power. Turn the 3 valves in the starting area, then press the button on the generator.

– Step 2: In the Bunker, use the 2 power switches (timed event). Run from one switch to the next very quickly.

– Step 3: Activate the machine in the Basement and kill any zombies near it.

– Step 6: Escort the Geisterkraft transfer device (at the red circle on the floor).

– Step 7: Wait for that machine to build a Tesla Gun Barrel.

– Step 9: Again, escort the Geisterkraft Device and let it build a Tesla Part.

– Step 11: Assemble the Tesla Gun at the Weapon Assembly Station.

– Step 12: Examine the console in the Basement.

– Step 13: Use the Sicherungsmaschine by the Weapon Assembly. It shows 4 colors, enter these colors at the 4 consoles (randomly generated each time you play, like blue, blue, green & red).

– Step 15: Activate and defend both secondary lightning rods at the same time.

– Step 16: Activate the left machine in the Basement.

– Step 17: Go outside. Make the Zeppelin show its lights, progress to the next round. Once done, shoot the lights under the Zeppelin. Then protect the Pod that the Zeppelin drops, pick up the Pod’s battery and bring it to the Basement. You have to repeat this step 3 times to get 3 batteries.

– Step 18: Use a Brenner’s Head that you can pick up as a drop from the flamethrower enemies. Then use them to shine a light on each of the 4 paintings around the map. Make sure to write down the hidden note symbols that appear together on each painting.

– Step 19: At the machine, match the symbols you see, namely the number and the bird.

– Step 20: All players have to shoot the orange bubble at the same time! This instantly triggers the zombie map’s boss fight, so gear up before you activate this step.

– Step 21: Shoot the lights on the Zeppelin and a Pod will crash down. Defend the Pod to reveal a battery. Shoot the boss to stun hiim and plant the battery on him very quickly. Repeat this final step 3 times to win!

Hardcore Easter Egg Walkthrough: (gives you a different ending when you save Klaus!)

That’s it! You now have all the details you need to complete the hidden Easter Egg puzzle in the new The Final Reich map. 😀

Have you been able to complete COD:WW2 Zombie’s The Final Reich?