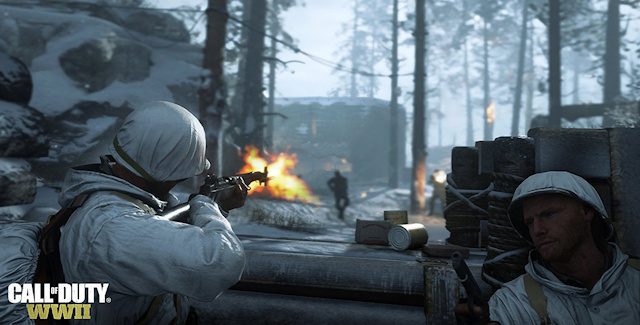 The Call of Duty WW2 trophies guide lists every trophy for this PS4 first-person shooter game and tells you how to get and unlock them all.

In the Call of Duty WW2 trophy guide we’ll show there are 51 Trophies (15 Hidden Trophies) that can be earned in the PS4 versions. Earn Bronze (38), Silver (10), Gold (2), and Platinum (1) Trophies to increase your Gamer Level.

6. Who Needs a Pendant? (Silver) — Request Aiello to toss you signal smoke and call in mortar strikes 10 times.

7. Potato Masher (Bronze) — Save 5 allies by throwing away a live enemy grenade.

10. Quarter Given (Bronze) — Get 4 unique groups of enemies to surrender.

15. One of the Lucky Few (Bronze) — Breach the seawall in under 2 minutes without taking MG fire.

Location: This can be done in “Mission 1: D-Day” during “Objective: Take the Beach”.

The first thing you do in Mission 1 is to run up a beach guarded by MGs firing at you. For this trophy you are not allowed to be hit by the MGs at all. However, you are allowed to restart checkpoints if you do get hit.
There is also a hidden time requirement of 2 minutes. The timer isn’t shown in-game so you just have to be as quick as you can be.

Tips: The strategy is to stick close to Pierson. He will run when it’s safe to and take cover when needed. You just have to stick to him like glue and run very closely alongside him. Then the MGs have a low chance of hitting you. When Pierson takes cover you should crawl on the ground. While crawling the MGs are less likely to hit you.
Sometimes you still get hit, it’s somewhat random and may take a few tries. Basically, just stay close to Pierson and crawl behind cover while the MGs are firing. When the MGs stop firing, move on to the next cover.

Note: You can restart the checkpoint when being hit. The trophy pops when detonating the pole charge at the seawall.

16. Ack Ack (Bronze) — Protect your tanks by shooting down all planes in Operation Cobra.

Location: This can be done in “Mission 2: Operation Cobra” during “Objective: Get on the AA Gun”.

After getting on the AA Gun in Mission 2, you have to shoot down bombers trying to attack your allied tanks. There are 20 planes total.

Note: You are allowed to restart checkpoints if you miss a plane.

17. Marksman (Bronze) — Cover Zussman from the church without missing a shot in Stronghold.

Location: This can be done in “Mission 3: Stronghold” during “Objective: Scout the Courtyard”.

In the church of church of Mission 3 you will have to go to the clocktower to provide cover fire for Zussman. Pick up a sniper rifle at the top of the tower. Now every shot you fire has to hit an enemy until Zussman reaches his target.

Note: You are allowed to restart checkpoints if you miss a shot.

18. Sunday Driver (Bronze) — Complete the driving portion of S.O.E. without hitting any obstacles.

Location: This can be done in “Mission 4: S.O.E.” during “Objective: Stop the Train”.

In Mission 4 there’s a driving section. You’ll be driving a car to catch up to a train. During the drive you are not allowed to ram any obstacles (rocks, fences etc). This is fairly self-explanatory.

Note: If you do hit anything, just restart the checkpoint. – The trophy pops as soon as your buddy takes over the wheel and you switch to the MG.

19. Silent Night (Bronze) — Sneak through the courtyard undetected in Liberation.

Location: This can be done in “Mission 5: Liberation” during “Objective: Place Explosives on the North Gate”.

In the first hostile area of Mission 5, you are armed with only a silenced pistol and must sneak past enemies to place two bombs.
As soon as the section starts, go outside on the balcony and jump on the railing (don’t drop down), then jump on the ledge of the house. You can go around the ledge to the next balcony where an enemy is standing. Stealth-kill him, enter the building and head downstairs. Then through the door and you’re already at the first bomb. Plant it, then pick the lock of the nearest door. Behind the door head upstairs and – as before – jump on a balcony and then on the ledge of the house to move undetected above the enemies. Make your way to the opposite side of the area where the Southern Bomb must be placed. The trophy unlocks immediately when planting the second bomb.

Note: You are allowed to restart checkpoints when detected.

20. Gasoline Cowboy (Bronze) — Rescue your allies with the Sherman while keeping your armor above 80% in Collateral Damage.

Location: This can be done in “Chapter 6: Collateral Damage” during “Objective: Reach the Theater”.

At the very start of Mission 6 you will be driving a tank. It’s a relatively lengthy section that lasts for about 10 minutes. During the tank drive there will be enemies with rocket launchers and enemy tanks shooting at you.

Tips: The armor of your tank must stay above 80% to earn the trophy at the end of this section. Your armor is shown in the bottom left corner. However, it doesn’t show how many % you have remaining so you’ll have to guess. Try not to get hit in the beginning at all. Stay back as far as possible and shoot at the buildings to clear out enemies.
Later on there will be more difficult sections. At one point, there will be 2 tanks driving around the map. You have to drive behind buildings so they lose sight of you, then ambush them from behind. Two shots from behind (or 1 in the back, 1 in the side) are enough to destroy an enemy tank. Just avoid shooting them at the front as they are heavily armored there and will fire back.

Note: You can put the difficulty on Rookie to make it go smoother. – If you get damaged too badly, restart the checkpoint.

21. Fog of War (Bronze) — Sneak through the Dragon’s Teeth undetected in Death Factory.

Location: This can be done in “Mission 7: Death Factory” during “Objective: Find your Squad”.

For this you must get through the foggy forest without being detected by human enemies. There is one dog that will always detect you and that’s fine. It’s the woods area where you see the dead pilot hanging from his parachute.

The trophy unlocks after reuniting with your teammate, opening the door inside the bunker, and reaching the woods area that doesn’t have any fog.

Note: You can restart checkpoints if you get detected. – If an enemy sees you for just a moment that’s okay as long as you don’t alert the entire camp.

Location: This can be done in “Mission 8: Hill 493” during “Objective: Capture the Hill / Escort the Engineer”.

Shortly after the start of Mission 8, you will have to escort an engineer holding an explosive pole charge up a hill. There is an MG guarding the hill. Shoot the MG to suppress it, then quickly tell the engineer to move on. Repeat this until he reaches the top of the hill. You always have to shoot at the MG a few times until it stops firing. Some enemies will also spawn so be sure to kill them.

Note: If the engineer dies you can simply restart the checkpoint to retry.

23. Flyboy (Bronze) — Protect the bombers by personally shooting down 12 enemy planes in Battle of the Bulge.

24. Infiltrated (Bronze) — Reach the sniper perch without being detected in Ambush.

26. Defender (Bronze) — Protect the convoy by shooting down all the planes in The Rhine.

32. Fireworks (Silver) — In The Final Reich, retrieve the artifact.

Tip: How to complete all Artifact-related Challenges the game gives you on The Final Reich zombies map, including how to trigger them, is explained in detail in our 100% “Call of Duty WW2 Zombies The Final Reich Guide” that shows step-by-step how to get it.

34. Red Mist (Bronze) — In The Final Reich, get 10 kills from a single Bomber’s explosion.

35. Strike! (Bronze) — In The Final Reich, knock over 10 zombies with a Wüstling charge.

Tips: Wustling zombies are bigger than your standard zombies and carry a big weapon. They will start their Charge attack once you hit them. It’s important to know that they will charge exactly in the direction you shot them from. Keep that in mind when you start his attack.

Once you hit wave 11, Wunstling zombies will show up regularly. Let all zombies spawn in and lead the train in the right position before you shoot at the Wustling.

Note: The pilot light area outside the bunker and the bunker stairs are a good spot to keep the train under control and set up your Wustling shot.

36. White Knuckles (Bronze) — In The Final Reich, survive 3 Pest waves in a single match without getting hit.

45. Worst Christmas Ever (Bronze) — Complete Battle of the Bulge.

48. Dark Arts (Bronze) — In The Final Reich, build all variants of the Tesla Gun.

49. Lurking Around (Bronze) — In The Final Reich, find and shoot Dr. Straub.

50. Undertaker (Bronze) — In The Final Reich, kill the Bomber with the shovel.

Tips: Before starting a zombies match on The Final Reich, you should pick the Medic Class with the Camouflage ability. This renders you invisible for a few seconds which is perfect to melee kill enemies without being attacked by them.
The best place to get the trophy is in the bunker. After turning on the power you can go through the middle door in the bunker. Behind that door are always 4 Bombers. Use the Camouflage ability before opening that door and then use melee attacks to kill one of them.

Bombers also spawn in later rounds (starting at round 12+ or so). The bunker is just the first and easiest place to do it.
Keep in mind your Camouflage ability must first charge up. This happens automatically when you kill zombies. It will then show a red circle in the bottom right corner of the screen. Press L1 + R1 to activate the Camouflage once it’s powered up.

Please comment if you have any Call of Duty WW2 trophy unlock tips of your own. Kudos will be given. – Thanks for visiting!