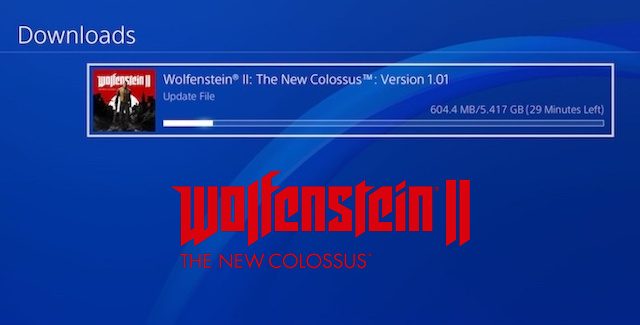 Here are some of the newly discovered Wolfenstein 2: The New Colossus glitches and solutions.

Note that these Wolfenstein 2: The New Colossus glitches can of course get patched by the developer at any time. But you might encounter the here-under listed glitches for yourself in the meantime.

Out of Bounds Glitch

You can go out of bounds if you go swimming under the pier in the Manhattan District.

This video explains the Wolfenstein 2: The New Colossus glitch in detail:

How To Fix Glitches: Download the latest patch for Wolfenstein 2: The New Colossus, the developer Machine Games will use patches/updates to try and fix the most common glitches in this PC, PS4, Xbox One & Switch title. The Day 1 patch takes up a little more of your harddrive space at 5GB.

Here’s the list of changes that will be implemented on Day One.

An update contains changes that are permanently stored on your system and only needs to be downloaded once. You can download the latest update by launching Wolfenstein 2: The New Colossus while connected to PlayStation Network, Xbox Live or Steam. You will be prompted to install the update if you do not already have the latest version.

• The Day One Patch includes a wide range of optimizations, so we highly encourage everyone to download and apply the update prior to playing the game. We anticipate the Day One Patch being approximately 5GB in size.

There are several bugs for the game from the get-go on the PC side. The first issue tackled in this video is the BSOD or system crash while trying to change the game resolution (link to Nvidia Hotfix Driver), and the second issue solved was about loading the game to find no in-game menu at all (completely blank).

• Temporarily disabled Async compute on 1080ti until driver fix is in

Here’s what future Patches will add:

• Shortly after launch, Bethesda will be providing more information on what’s coming in a future game patch for Wolfenstein II: The New Colossus, including additional game improvements and features, Xbox One X support, and new Challenge missions.

Have you encountered any Wolfenstein 2: The New Colossus glitches?