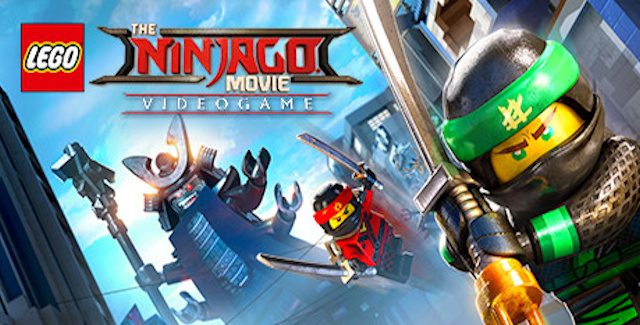 Train, Fight, GO! Our 100% The Lego Ninjago Movie Videogame walkthrough will guide you through the beginning to ending moments of gameplay with strategy tips for this action-adventure game on the PS4, Xbox One, Switch & PC.

The Lego Ninjago Movie Videogame is rated PEGI 7 in Europe & ESRB E10+ in America for everyone 7 to 10 years or older. This game includes Cartoon Violence.

In the game, players battle their way through waves of enemies with honour and skill as their favourite ninjas Lloyd, Nya, Jay, Kai, Cole, Zane and Master Wu to defend their home island of Ninjago from the evil Lord Garmadon and his Shark Army. To do so, they must master the art of Ninjagility which allows them to traverse Ninjago by wall-running, high-jumping and battling the foes of Ninjago to rank up and upgrade the ninja’s combat skills. Players can harness the power of Spinjitzu combat to defend Ninjago together.

Find your inner ninja with the all-new LEGO NINJAGO Movie Video Game! Play as your favorite ninjas, Lloyd, Jay, Kai, Cole, Zane, Nya and Master Wu to defend their home island of Ninjago from the evil Lord Garmadon and his Shark Army. Master the art of Ninjagility by wall-running, high-jumping and battling the foes of Ninjago to rank up and upgrade the ninja’s combat skills. Only in the LEGO NINJAGO Movie Video Game will you experience the film across 8 action packed locations each with its own unique Challenge Dojo. And with the Battle Maps, play against friends and family in competitions for up to four players!

Question: How many playable Ninjago characters are in the game?

Answer: There are exactly 101 playable characters in the game. That is, if you’re not counting that you can save up to 8 custom characters using the game’s character creator.

A quick look at the character creator in the Terminals temple building’s 2 yellow lockers section.

Want to know how to create fun custom characters like Fuchsia Ninja, Meowthra, Bad Cop, Lizard Man and more? Check this out:

Answer: Switching to any unlocked character in the game can only be done while you’re in Free Play mode (it only works in Story mode for those character available per level). The “switching characters” button is: Hold the Triangle button on PlayStation / holding the Y button on Xbox / X button on Nintendo, to bring up the character menu.

Answer: When you’re already playing the game in any chapter, press the pause button and in the menu that comes up you will find the option. Select that option and you’ll be brought to an overview that shows all the Story chapters you’ve already finished and that as a result are now playable in Free Play mode. You can even select what part of each chapter you want to start in for Free Play Mode.

Answer: The game will automatically save your progress once you reach the end of a chapter. If you want to save the game manually, you have to press the Start button get to the pause menu and from there you can exit the game, at which point the game should ask if you want to save and quit… say “Yes” to save.

Answer: None discovered as of yet. – But you can keep an eye on our “The Lego Ninjago Movie Videogame Glitches” page to find out about any glitch solutions.

Question: What are all available Special Abilities?

Answer: The main heroes have unique special skills that let them do Special Moves. These characters’ abilities are shown here-under. Below is a showcase of all of the unique moves in The Lego Ninjago Movie Videogame, along with time stamps for when each character move starts.

– Combat & Upgrades: Master new skills and upgrade your weapons all in your training to find your inner ninja.

– Ninja-gility: Are you ready for your next lesson? Master your Ninja-gility to jump higher, swing further and kick harder!

Welcome to our 100% complete The Lego Ninjago Movie Videogame walkthrough!

100% means that using this walkthrough and our location guides (listed above), you will see how to get all characters unlocked, and see where to find all Ninja Scrolls AKA Red Bricks, Gold Bricks, as well as the Ninjanuity Tokens and Character Tokens.

Your voice-over guide in this chapter will be Brian (Jay covers some others). Let’s have some family-friendly fun! 😀

True Ninja requirement in the Prologue is: 50,000 studs.

The playable characters in the Prologue are:
• Lloyd
• Master Wu

Characters you unlock for completing the Prologue are:
• Lloyd
• Master Wu

Tip: Each character has up to 4 abilities. These are shown on-screen beneath your Hearts. New obstacles will show you which ability to use. Your character may not have that ability… but another character might!

The playable characters in Chapters 1-3 are:
• Kai
• Cole

Characters you unlock for completing Chapters 1-3 are:
• Kai
• Cole

Chapter 2 Story: “Lord Garmadon attacks (again) and this time, Lloyd tries to use the ultimate weapon and send his father away for good. Unfortunately, Lord Garmadon has other plans.”

Tip: If an enemy winds up an attack, you should either dodge out of the way or attempt to intercept with your own attack!

The playable characters in Chapters 4-5 are:
• Nya
• Zane
• Master Wu

Characters you unlock for completing Chapters 4-5 are:
• Nya
• Zane

Chapter 6 Story: “Lloyd has failed epically and the team regroups with Sensei Wu.”

Tip: Select a symbol on the scrolls to summon a Ninjanuity Power. Each Ninjanuity Power grants a new ability.
You can come back to the Wall of Ninjanuity (selectable from the in-game character wheel pop-up menu) to buy any new abilities that become available once you have collect more of the 21 Ninjanuity Tokens, which you’ll automatically collect if you play through the story without skipping any parts.

Chapter 7-8 Story: “Sensei Wu has led us out of Ninjago City into the jungle in search of the Ultimate Ultimate Weapon but it looks like Lord Garmadon has followed. The battle of two brothers begins!”

Chapter 9 Story: “Sensei Wu has disappeared but the team has captured Lord Garmadon. The search for the Ultimate Ultimate Weapon most continue.”

The playable characters in Chapter 9 are:
• Nya (Unmasked)
• Zane (Unmasked)