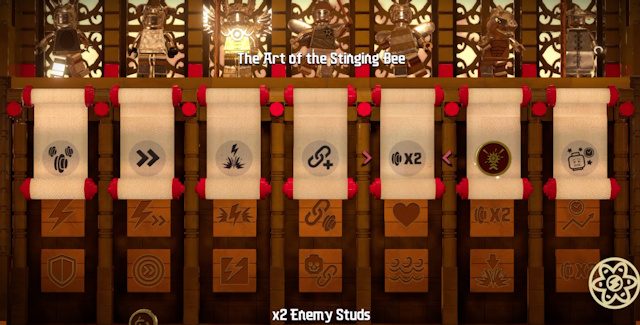 Once you unlock the “Studs Score Multiplier” Ancient Scroll, you can then activate the Ancient Scroll cheat in the pause menu’s Cheat section.

STEP 2: After you’ve bought the score multiplier Ancient Scroll AKA Red Brick, unfortunately there will not be 4 more of these “Studs Score Multiplier” Ancient Scrolls to find (in past Lego games these would increase the Studs collection multiplier to times 3,840!).

Instead, you’ll have to make due with unlock Stud multipliers that you get from executing special abilities that you can buy with Ninjanuity Tokens.
You can go to the Wall of Ninjanuity (selectable from the in-game character wheel pop-up menu) to buy any new abilities that become available once you have collect more of the 21 Ninjanuity Tokens, which you’ll automatically collect if you play through the story without skipping any parts.
Note: Select a symbol on the scrolls to summon a Ninjanuity Power. Each Ninjanuity Power grants a new ability.

Row 2 Stud-related Ninjanuity Powers:
• Buy “The Art of the Floating Butterfly” to get Attack Chain +1 and Stud Magnet, which means when you overcome enemies using the Floating Butterfly attack mid-air, it will result in attracting all nearby studs towards you.
• Buy “The Art of the Skyward Dragon” to get x2 Enemy Studs, which means enemies defeated with the Skyward Dragon attack will drop twice as many studs.

STEP 4: You can increase your Studs total further by activating the “Stud Magnet” Ancient Scroll, found in Ninjago City Beach (shown in the visual guide below). And then replay the “Epilogue: Destroy Ninjago City” Bonus Level of Story Mode.

STEP 5: Now repeat the previous step over and over (or play the game as you normally would) to get lots of money to rebuild bridges in Free Play! 😀

This video guide shows where to find the Score Multiplier Ancient Scrolls in the game:

If you have any more The Lego Ninjago Movie Videogame money cheats or tips, please leave a comment and we’ll add it to this guide with credit to you. 🙂