Life Is Strange: Before the Storm Episode 2 Release Date 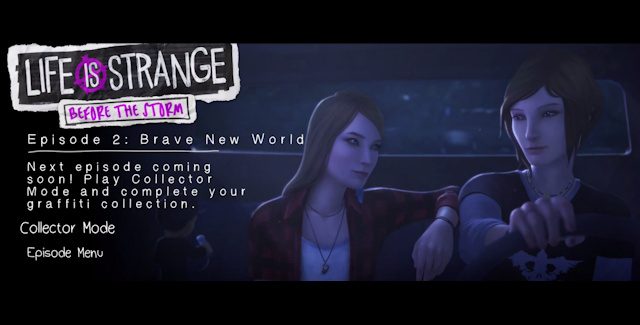 What is the Life Is Strange: Before the Storm Episode 2 release date? Officially it’s set for “coming soon” in 2017. On average Square Enix has released the Life Is Strange Episodes of Season 1 worldwide every 8 to 10 weeks, with this shorter prequel season promising to arrive in a much more rapid, monthly fashion than their other digital releases*. — As such, it’s most likely that the second downloadable episode, titled “Episode 2: Brave New World”, will arrive as soon as a Thursday in October 2017 on PC, PS4 & Xbox One. Development delays notwithstanding. – UPDATE: Thursday, October 19th, 2017 has been confirmed as the final release date! 😀

Check out the Episode 1 ending preview that shows what’s to come in Episode 2:

Note that the man behind the door doesn’t seem to be the car owner (where you get the option to steal the money in the car), nor is it Frank. So it’s someone else she stole money from to get out of Arcadia Bay, but who?

*To quote the game’s co-director Chris Floyd when asked if the 3 episodes are locked for release:
“We constructed an arc of the whole storyline very early on, but of course as you get in and you really work with these characters and you work with these individual scenes and you start to see what’s working and what’s not, it’s absolutely true that things change so we started witha lot of attention on our first episode. And [as] we move on to each episode we know basically what the main points are, but things change and we may even have some opportunities to react to what the fans see in Episode 1 and touch up some moments in Episode 2 & 3 if we’re lucky.”

He confirms this shorter release timeframe — that would still allow them to touch-up some scenes before each next Episode’s release — after Greg Miller asked him that question at GameSpot’s E3 2017 booth back in June. The quote can be found starting at 10:40 minutes into the interview here:

The Episode 2 conclusion achievement / trophy name hints at what events to expect:
• “O, Wonder” (Gold) — Complete Episode 2: Brave New World. – Image depicts the discovery of an ancient Mayan pyramid! Is that where Chloe & Rachel are driving their car to?

Season 1 Info: There are three main episodes in total in this prequel season of the game — keep in mind the Farewell episode is a bonus episode that only comes with the Deluxe Edition of the season pass. After the end of the Life Is Strange adventure game episodes, Deck Nine is nice enough to include a teaser trailer for the next episode. In this case the on August 31st, 2017 released Life Is Strange: Before the Storm Episode 1 Walkthrough included an Episode 2 preview, shown at the top of this page to reveal Episode 2 hints.

Season 1 Description: “Life is Strange: Before the Storm is a new three part; standalone adventure set three years before the first game in the BAFTA award-winning franchise.

You play as sixteen-year old Chloe Price who forms an unlikely friendship with Rachel Amber, a beautiful and popular girl destined for success.

When Rachel learns a secret about her family that threatens to destroy her world, it is her newfound friendship with Chloe that gives her the strength to carry on.

No longer alone the girls must confront each other’s demons and together, find a way to overcome them.

Note that the Bonus Episode titled ‘Farewell’ is only included in the Deluxe Edition, in it you play one last time as a young Max Caulfield in a special bonus episode.”

Watch the Life Is Strange: Before the Storm introduction trailer:

Here’s an interview with the development staff about Life Is Strange: Before the Storm:

October 12 Update: It’s been confirmed that Life Is Strange: Before the Storm – Episode 2 will be releasing October 19 on Xbox One, PS4 and PC (Steam). Here’s the trailer…

Future Updates: This section is reserved for future updates like the Episode 2 trailer.

What do you think will happen on the next episode of Life Is Strange: Before the Storm?