PlayStation 4 players in North America who are planning to pick up a physical copy of Level-5’s next major RPG, Ni no Kuni II: Revenant Kingdom, will have a few different options to choose from. Alongside the standard release, Bandai Namco announced today that the game will also be available in limited-quantity Premium and Collector’s Editions.

Regardless of which package you choose, you’ll get a bonus item along with the title. The standard “day one” edition comes with a copy of the game and the Special Sword DLC set, which includes five rare weapons. Meanwhile, the Premium Edition, which retails for $80, includes the aforementioned DLC pack, as well as a 3D papercraft kit, an exclusive DLC sword called the Dragon’s Tooth, and a soundtrack CD, all of which is housed in a special steelbook case.

The Collector’s Edition retails for $200 and includes all of the contents from the Premium Edition, along with a Ni no Kuni II art book, a chibi mechanical diorama, a Lofty plush, a “making of” documentary Blu-ray, a 3D papercraft display case, and the game’s newly announced season pass. You can see a shot of each edition and its contents below. 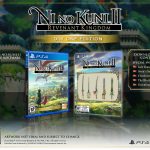 The Ni no Kuni II season pass can be purchased individually for $20. It includes two as-yet unannounced “large DLC releases,” as well as a supply kit that contains an assortment of helpful items for players to use. Bandai Namco will announce more details about the game’s two DLC expansions at a later date.

European players, meanwhile, will have their own special edition packages to choose from. The physical Prince’s Edition for PS4 retails for £85 and comes with a making-of Blu-ray, the game’s season pass, and a steelbook case, while the digital Prince Edition is available for both PS4/PC and contains the title and its season pass for £70. The PS4 King’s Edition costs £140 and includes the contents of the Prince Edition in addition to a Ni no Kuni II vinyl record, a diorama figure, a music box that plays the game’s main theme, and an art book; the PC King’s Edition also includes all of the aforementioned items but with a digital copy of the game for £130. Everyone who pre-orders the title will receive the Special Sword DLC set as a bonus. You can see images of the Prince and King editions below. 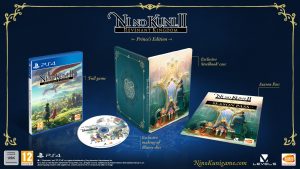 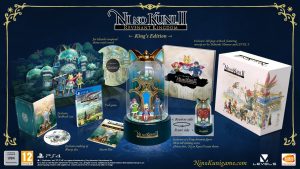 Ni No Kuni II arrives on PS4 and PC on January 19. The game was originally scheduled to release this year, on November 10, but Bandai Namco ultimately pushed it back to 2018 in order to “deliver the full Ni no Kuni II experience.