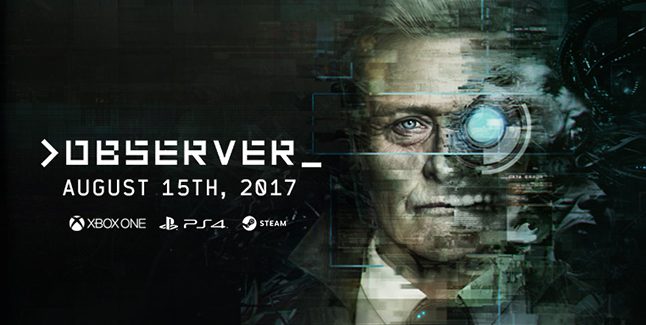 Observer, a cyberpunk horror game developed by Bloober Team, the studio behind Layers of Fear, will launch for PlayStation 4, Xbox One, and PC on August 15, publisher Aspyr Media announced.

Check Out the Observer New Trailer:

Here’s an overview of the game, via its Steam page:

The year is 2084. If you somehow survived the Nanophage, odds are you were killed in the War. Those who live have turned to drugs, VR, neural implants— anything to distract themselves from this new reality. You are Daniel Lazarski, an elite neural detective known as an Observer, and part of a corporate-funded police unit whose purpose is to hack and invade suspects’ minds. In this future, anything you think, feel, or remember can be used against you in a court of law.

When you receive a mysterious message from your estranged son, a high-level engineer for the almighty Chiron Corporation, you journey to the seedy Class C slums of Krakow to investigate. But as you hack into the unstable minds of criminals and victims to look for clues, you are forced to relive their darkest fears. How far will you go to discover the truth?

With cyberpunk legend Rutger Hauer (Blade Runner) as Detective Lazarski, Observer is a first-person psychological horror story that focuses on a dark, dystopian setting. Developed by Bloober Team, the creators of Layers of Fear, Observer is a horror experience meant for mature audiences. What you see will disturb you.

• The Future of Fear – Discover a dark cyberpunk world beset by plagues, war and squalor. Play as the new front line of neural police as you hack into the jagged minds of the insane.

• Interactive Insanity – Designed to disturb, Observer is a psychologically twisted, interactive horror experience that will leave you questioning your reality as well as your very sanity.