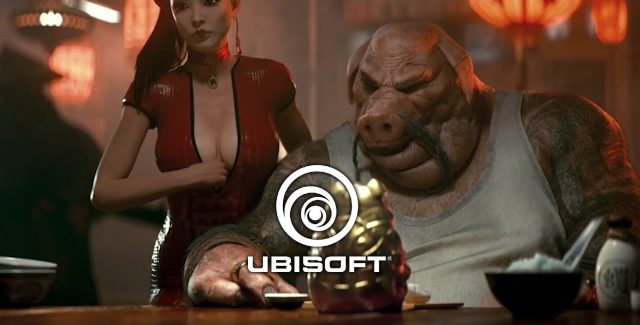 Exciting surprise reveals this year were: Beyond Good & Evil 2, Mario + Rabbids: Kingdom Battle (despite the many leaks), Skull & Bones, Starlink: Battle for Atlas, Just Dance 2018 (not that surprising), Steep: Road to the Olympics, South Park: Phone Destroyer, and Transference VR.

• Mario + Rabbids: Kingdom Battle introduced for Switch by Ubisoft president Yves Guillemot and Nintendo’s creative fellow Shigeru Miyamoto. Both have passion for games and love each other very much… now on to the game reveal. It’s Rabbids humor brought into the Mario world. Game creator almost cries at Miyamoto praising the game. mario-rabbids.com website. Gameplay trailer shown. Rabbids teleported into the Mushroom Kingdom and it messes up the world, so they have to fix it together. Turn-based tactical adventure fighting waves of rabbids that turned bad. Switch from exploration mode to battle zone mode that works like XCOM’s turn-based gameplay. Characters have their own set of tactical moves and the environment impacts gameplay too like using the Rabbid Pipes will give the player rabbid a special move. Go to the store.ubi.com for figurines (not amiibo?). — Coming to Switch on August 29th, 2017.

• The Crew 2 CGI trailer introduces the game. Touts the player character as the king of all motorsports. More info & beta signups at thecrew2game.com/beta website. In the sequel you can go off-road through nature, explore the open oceans, and take to the skies in aircraft (stuntplanes & helicopters). — Coming in Early 2018 to PS4, Xbox One & PC.

• Transference announce trailer shows a new VR game by Spectrevision’s Elijah Wood (gamer/(voice)actor of LOTR Frodo fame). Go into fictional trauma of other people’s memories. It’s a fun trailer, but might be a horror game. More info at the transferencegame.com website. — Sounds like a PS4 & PC title. Coming Spring 2018.

• Skull & Bones pirate world debut trailer shown. Pirate ship battles based on Assassin’s Creed 4’s ocean gameplay. Become the ultimate pirate kingpin by looting ships. 5 VS 5 PvP team-based battles against rivals, the team with the most loot wins the match. Gameplay footage shows the different ships you can sail, ramming & cannonfire seem to be the most effective attack methods, although boarding is possible if you can get close. Giant Kraken teased. Sign up at the skullandbonesgame.com website for a chance to play it early in the beta. — Coming to PS4, Xbox One & PC in Fall 2018.

• Starlink: Battle for Atlas toys-to-life debut trailer shown. The legion consumes everything in its path. Sci-fi space exploration game with Skylanders’ portal-like support with toy spaceships that connect to the top of your controller. More info at the starlinkgame.com website. — Coming to Switch, PS4 & Xbox One in Fall 2018.

• Far Cry 5 trailer introduces the new open world game taking place in Hope County, Montana, America. Gameplay shows you controlling a sniper, dog, stuntplane & truckdriver as your teammates to take down the religious oppressors and free the people resisting them. More info on the farcry.com website. — Coming to PS4, Xbox One & PC on February 27th, 2018.

• Beyond Good & Evil 2 finally got a reveal trailer, which drops a lot of f-bombs. Returns us to a sci-fi world with flying cars and many worlds to explore in space. The prequel takes place before Jade’s birth / Beyond Good & Evil 1, with hybrid human-animals being created to be slaves in System-3, where you fight the system to free them all. Register for the space monkey program at the bgegame.com website; The site immediately went down after the announcement due to heavy traffic. — No systems or release date announced.