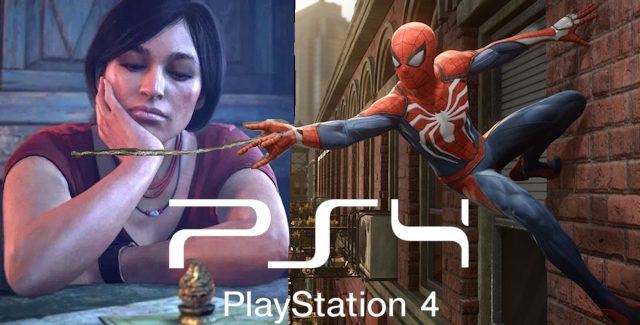 • Uncharted: The Lost Legacy opened the show with a new action-packed trailer where the two leading ladies explore caves, ruins and cities for ancient Inca treasure. — Coming to PS4 on August 22nd, 2017.

• Days Gone new trailer shown. Shows motorbike wolf chases, road-side ambushes, forest exploration, enemy camps, zombie hordes made up of hundreds of zombies, and there’s a zombie bear too. This is a zombie survival game. — No release window given.

• Monster Hunter World announced by Capcom for PS4 with debut trailer. Lots of giant dinosaur monsters to hunt. — Coming to PS4, Xbox One & PC in Early 2018.

• Star Child reveal trailer shown. A platformer where it seems you can step into a giant robot, or at least it’s helping you out against the bigger enemies. — Coming to PlayStation VR.

• The Inpatient announced by Until Dawn developer Supermassive Games in a reveal trailer. Takes place in a mental hospital. Ideal for those waiting on Until Dawn 2 (unconfirmed). More gameplay of this VR game was shown in the pre-show. — Coming to PlayStation VR.

• Final Fantasy XV: Monster of the Depth new trailer. Fishing simulator. You also cook with your buddies what you catch. — Coming to PlayStation VR on September 19th, 2017.

• God of War new trailer shown. Kratos and his son travel to a new land with new Gods who don’t take kindly on Kratos’ kind and monsters start attacking him again. The world serpent will help them, so not all mythical creatures are bad after all. — Coming to PS4 in Early 2018!!

• Detroit: Become Human new trailer shown. It’s an android rebellion, where conscience androids set each other free from the humans. Focus on the many different options you have to progress your story. Lead the android revolution. Will you use violence or be passive? — Coming to PS4 in… no release date given.

• Spider-Man new trailer for the PS4 exclusive. Fisk tower shown (he later appears in a videocall from prison). Spidey’s got tech support as he answers police calls and gets there first to apprehend the baddies. Really smooth action thanks to in-air slow-motion giving you take-down options as you tackle groups of Demon enemies at once. The Demon’s superpowered leader Martin Lee escapes in a helicopter, and a webslinging chase through the city ensues. The damage Spidey causes to the city is on a Man of Steel level. — Coming to PS4 sometime in 2018.

• Superhot VR announced for PlayStation VR with a trailer! — After a year-long Xbox One exclusivity period in 2016, a VR version came to PC half a year ago, and it’s finally coming to PS4 in Summer 2017.

• Undertale confirmed for PS4 & PS Vita. The friendly RPG where nobody has to die will soon be playable on your TV! — Digital download, as well as physical normal & collector’s editions coming to PS4, PS Vita & PC at fangamer.com (includes gold-plated music-box locket!) in Summer 2017.

• Strange Brigade coming to PS4 from the creators of Sniper Elite 4 and Zombie Army Trilogy. Promises to be a rip-roaring 1930s adventure for 1-4 players filled with pulse-pounding action, treacherous traps and tales of derring-do. More info at the strangebrigade.com website.

• Hidden Agenda introduces PlayLink, this game is the first of a few titles (Hidden Agenda, That’s You!, Frantics, Singstar Celebration & Knowledge Is Power) that are all about games that everyone can enjoy. No need for multiple DUALSHOCK 4 wireless controllers, simply start a game on your PS4, pick up your smartphones, gather around your TV and prepare for a different experience! – The reveal video shows where you can listen to the creators of Until Dawn, Supermassive Games talk about their new PlayStation VR game. Blending the best elements of movies and games, this story based adventure drops you into a tale rife with chilling moral dilemmas. Up to four of you can join in and influence the narrative, but beware – not all of you will be working towards the same objective… From quick-fire quizzes to immersive multiplayer experiences. — Coming exclusively to PS4 soon.

• That’s You! is the second Playlink title being shown off, it’s FREE for PSN+ subscribers! Watch PlayStation’s own Shu play the party game that’s all about… YOU! Set off on a journey of discovery with up to five of your friends and family, and find out what you really think about each other. — On July 4th, 2017 PlayStation Plus members will get the full version of That’s You! at no additional cost!

• MATTERFALL reveal trailer shown. Blast through explosive waves of contemporary arcade action from Housemarque, the makers of RESOGUN and Alienation. — Coming to PS4 on August 15th, 2017.

• No Heroes Allowed! VR announce trailer for PlayStation VR. “No Heroes Allowed! VR” is a real-time strategy game where you become the God of Destruction and, together with the Badmen and Badmella, aim for world domination! Still in development, so no release date.

• Spider-Man Homecoming VR Experience debut trailer. This will be a FREE title for the PS4’s VR platform.