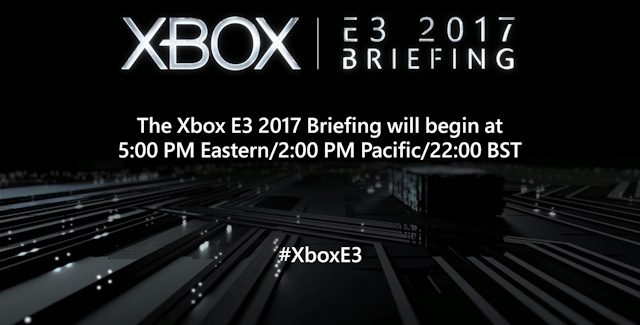 Xbox One exclusive reveals this year were: Crackdown 3, Forza Motorsport 7, Assassin’s Creed Origins, Metro Exodus, Life Is Strange: Before the Storm, Ori and the Will of the Wisps, and Anthem.
We also got to see more of EA’s Anthem, Rare’s Sea of Thieves, Undead Labs’s State of Decay 2, Cuphead, Playerunknown’s Battlegrounds, Tacoma, and lots of other games listed below.
Let’s not forget the new Xbox One Project Scorpio was renamed to Xbox One X console being made available the first week of November this year.

• Xbox One X 4K console promises to go beyond generations with 4K gaming and VR support. Renders at 60Hz. Fallout 4 VR coming to Xbox One. Xbox One games & accessories will work on all three systems (Xbox One, Xbox One S & Xbox One Scorpio). 6 terraflops GPU power. Coming Holiday 2017.
6 Teraflop GPU clocked at 1.172 Ghz, 12GB of GDDR5 memory at 326 GB/second Memory Bandwidth, 2.3 GHz Custom CPU, to get True 4K HDR (8 million pixels) includes 4K UHD Blu-ray playback. 1TB
HDD Storage inside. All Xbox One accessories & games work on Xbox One X from Day 1. Supersampling makes it that the games will still look better even if you don’t have a 4K TV yet. Liquid-cooled Vapor Chamber used to cool the console. Xbox One X is the smallest Xbox ever. — Coming November 7th, 2017 for $499.

• Forza Motorsport 7 announced with debut trailer. Debuts the new Porche GTA RS car. On-stage gameplay debut by female racing & stunt drivers who also seem to star in the game’s campaign. Promises 60FPS 4K graphics on Xbox One X! — Coming to both Xbox One family and Windows 10 PC (buy once, play it on both) on October 3rd, 2017.

• 42 games will be shown during this show, with 22 games with console-exclusivity on Xbox One! These games are playable on all systems, but play best on Xbox One X.

• Metro Exodus announced with gameplay trailer. Artyom is back as a ranger in the cult-classic first-person shooter series’ third game. Beautiful post-apocalyptic world with giant rats, wolves & bears attacking you as you try to survive. At the end the main character jumps on a moving train (not a metro?) suggesting the outside world is being taken back from the radio-activity.

• Assassin’s Creed Origins debuts with trailer. Takes place in ancient Egypt, chronicles the birth of the Assassin’s Brotherhood. The main character is the last guardian of his region. Gameplay from the Siwa region shows you can control an eagle to get a bird’s eye view from above a fortress to find & kill the next masked enemy Medunamun. 4K graphics on Xbox One X. — Coming October 27, 2017.

• Playerunknown’s Battlegrounds coming exclusively to Xbox One later in 2017.

• State of Decay 2 is the anticipated zombie shooter sequel. Build a place to call home with your group and defend it from the zombie horde. “How will you survive?” It’s Xbox One X enhanced for 4K. — Coming to Xbox One & Windows 10 PC exclusively in Spring 2018.

• Minecraft will be unified. Promises massive community-run servers. Lydia Winters announced Mobile, VR, Windows 10 PC & all consoles can play together from Summer 2017. 4K update coming in Fall 2017. A new 4K look coming in Fall 2017 for you to try out with the Super Duper Graphics Pack, coincides with the Xbox One X launch.

• The Last Night trailer shown with pixellated graphics. By Raw Fury. — Coming to Xbox One & Windows 10 PC as a Xbox One X launch exclusive.

• Sea of Thieves gameplay shows the voyage of the secret shrine with a comedic beat voice-over narration, as the pirates dive for treasure. Explore islands, fight skeletons, explore caves. Fast travel by shooting yourself out of a cannon! Join the insider programme to play it early. Xbox One X enhanced. — Coming as a Play Anywhere title to Xbox One & Windows 10 PC in Early 2018.

• Crackdown 3 new explosive trailer introduced by professional hype-actor Terry Crews. Cel-shaded multiplayer madness shown. Up to 4-player online co-op, but offline is singleplayer-only. The power of the cloud is said to be used for online multiplayer only, not part of the campaign. Xbox One X enhanced for 4K graphics. It’s a Xbox One & Windows 10 PC exclusive. — Coming November 7, 2017.

• Life Is Strange: Before the Storm world premiere trailer shown. Prequel takes place in Oregon. It’s is a new three part standalone story adventure set three years before the events of the first game. This time play as Chloe Price, a rebel who forms an unlikely friendship with Rachel Amber in dramatic new story in the BAFTA award winning franchise. — Xbox One X enhanced (also on PS4 & PC). Episode 1 of 3 coming August 31, 2017.

• Ori and the Will of the Wisps debut trailer shown with live pianist music. Ori and the Blind Forest sequel has more beautiful graphics, story & platforming. “A new story begins…” Xbox One & Windows 10 PC exclusive. No release date revealed.

Tags: Anthem, Assassin's Creed Origins, Crackdown 3, Forza Motorsport 7, Life Is Strange: Before the Storm, Metro Exodus, Ori and the Will of the Wisps, Playerunknown's Battlegrounds, Sea of Thieves, State of Decay 2, Tacoma