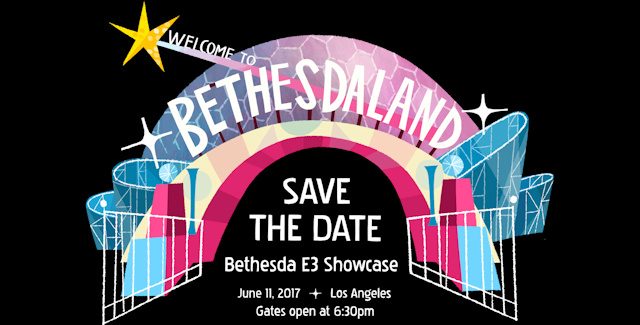 Exciting surprises this year are: DOOM VFR, Dishonored: Death of the Outsider, The Evil Within 2, and Wolfenstein 2: The New Colossus.
Along with further reveals for Quake Champions, The Elder Scrolls: Legends, Skyrim for Switch, Fallout 4 VR, and other games listed below.

• Fallout 4 VR is the 2nd VR game in development at Bethesda. The first open world game in VR. Featuring new combat, crafting and building systems fully reimagined for VR – including VR-enhanced V.A.T.S. – Fallout 4 VR isn’t just a jaunt through the Wasteland, it’s the entire game. — Coming October 2017 on PC for the HTC Vive.

• The Elder Scrolls Online now has 10 million players who tried it out. Morrowind footage shown of the newly released expansion. I wish publishers would stop showing those fake Twitch streamer over-reactions.

• Creation Club content from the dev and outside creators (who work together) getting added to Skyrim & Fallout 4 and it’s fully compatible with your savegames. Coming Summer 2017.

• The Evil Within 2 teaser trailer shown. In the sequel Detective Sebastian Castellanos must go back to the nightmare town to save his daughter Lilly. Quick gameplay segment at the end shows loads of new enemies. Will you face adversity head on with weapons and traps, or sneak through the shadows to survive? — Coming to PC, Xbox One & PS4 on Friday October 13th, 2017.

• Wolfenstein II: The New Colossus announced with 50’s Lassie style TV show about “Liesel” the giant robotic guard dog that teases the MachineGames-developed sequel, powered by id Tech 6. B.J. wakes up in a hospital bed to his girlfriend pregnant with his twins. He’s being hunted by the nazis. He wants to put the fire back into the American people to fight back with a second revolution (in 1961). Ends with explosive gameplay footage! — Coming to PC, PS4 & Xbox One on October 27th, 2017.

• Missing from the show were: Their new IP called Starfield, The Elder Scrolls 6 (definitely in development), and Fallout: New Orleans (rumored).