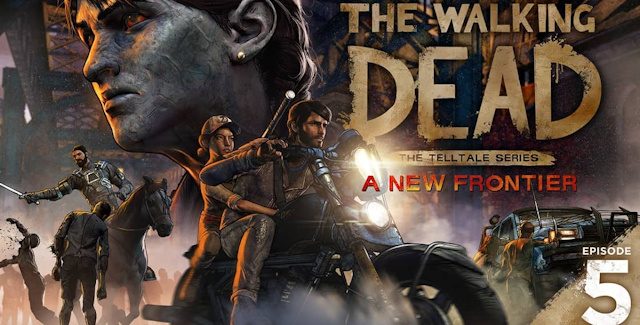 The Walking Dead Game Season 3: Episode 5 walkthrough for “Episode 5: From the Gallows” will guide you through the beginning to ending moments of gameplay with strategy tips for this graphic adventure game on the PC, Mac, PS4, Xbox One & Mobile (iOS and Android-based devices).

Please note that viewers must be at least age 18 to watch. Fair warning given because the game includes Violence, Blood and Gore, Drug Reference, Strong Language.

When family is all you have left… how far will you go to protect it?

After society was ripped apart by undead hands, pockets of civilization emerge from the chaos. But at what cost? Can the living be trusted on this new frontier?

Includes access to all five episodes in this all-new series from the award-winning studio, Telltale Games.

Additionally, here’s a developer discussion for Season 3. Hear from Telltale’s writers, designers, and developers that worked on The Walking Dead: A New Frontier talk about Clementine and Javier’s story!

Welcome to the The Walking Dead Game Season 3: Episode 5 walkthrough!

Doug will be your guide showing you around the game’s chapters atop this page with the more nice-guy choices, whereas XCV offers an alternate playthrough below.

Below you’ll find both playthroughs’ endings based on the different choices made last episode.

Special Note: Players will leave this episode in very different places depending on where they chose to go in the first and second season, and this will greatly affect their story in this season.

Synopsis: In Episode 5: ‘From the Gallows’, all hell breaks loose when the walls are destroyed and the dead begin to overtake Richmond.

Richmond teeters on the brink of collapse, and the lives of its citizens and all those closest to Javier hang in the balance. The decisions you’ve made and bonds you’ve nurtured will determine which characters now trust Javi to safeguard all they hold dear as this crisis pushes every relationship past its breaking point.

Walkers flood the New Frontier camp, leaving Javier, Clementine, and their allies in a tight spot. Tensions within the Garcia family rise to a boiling point. With past promises looming over your head, how will you choose who to trust, and who to protect? In ‘From the Gallows,’ the epic finale of The Walking Dead: A New Frontier, you will find out just how heavy the consequences of your actions can be…

Episode 5: From the Gallows walkthrough that contains the full Episode 5.

All Endings walkthrough for Episode 5:

The Walking Dead: A New Frontier developers talk about choice throughout the series leading to the season finale of A New Frontier.

Overview for all Alternative Choices in The Walking Dead Game Season 3: Episode 5:

• How Clementine & Gabe Kiss depends on these Alternative Choices: Hand Gabe the gun, or choose to shoot Gabe yourself.

Next Season: Please join our upcoming “The Walking Dead Game Season 4 Release Date” discussion about what will happen next episode.

Thanks to Telltale Games, Doug, XCV & GamerZombie for the walkthrough videos.