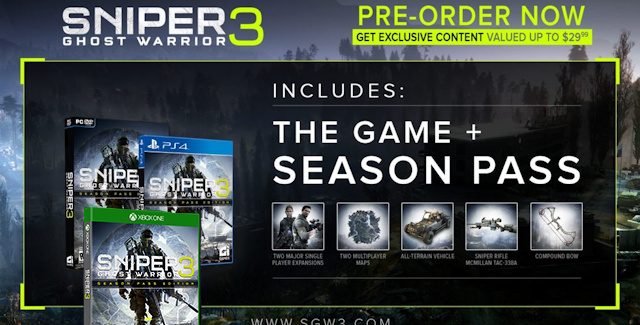 Here we will show you how to unlock all Sniper Ghost Warrior 3 codes with a cheats list that’s valid for the PC, PS4 & Xbox One versions (where available).

This video map shows you all 11 fast travel locations on the Mining Town Map in Sniper Ghost Warrior 3.

The next one shows you all 11 fast travel locations on the Village Map in Sniper Ghost Warrior 3.

Pre-order Sniper Ghost Warrior 3 and receive the Season Pass Edition with free DLC. The at $30 valued season pass on PS4, Xbox One and PC includes the following:

• Two major single-player expansions:
– The Escape of Lydia
– The Sabotage; Where players will follow the story of the separatists and experience everything from the other side of the conflict making the story more being in the grey zone than black and white.

• In addition to the highlighted extras above, developer CI Games plans to roll out free exclusive content drops and special events that will enhance the game throughout 2017.

During the following E3 2016 demonstration with the Sniper Ghost Warrior 3 developers, you learn about the game world of Sniper Elite 4 and see the next-gen down-the-scope gameplay from this anticipated sequel.

Get some gameplay tips and tricks from the creators of this tactical shooter title themselves.

Up next: The “Top 10 Things to Know About Sniper Ghost Warrior 3”.

Use these tips before deploying into the Republic of Georgia. As seen in the video, there are plenty of ways to play the game that cover a variety of styles. Control and modify the drone, equip a wide variety of arsenal, interrogate enemies, and explore three large open-world maps filled with hidden secrets and dangerous threats – you being the most dangerous threat of them all.

Do you know of any Sniper Ghost Warrior 3 cheats or unlockables?
Let us know in the comments, you’ll get credit for finding out. – Thanks for visiting!