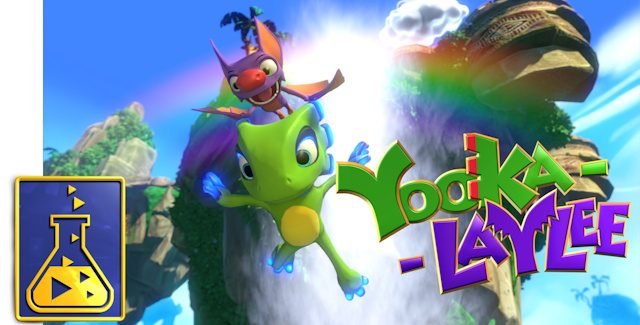 Here we will show you how to unlock all Yooka-Laylee codes with a cheats list that’s valid for the PC, PS4, Xbox One, PC, Mac & Switch versions (where available).

How To Unlock All 5 Grand Tome Worlds

• [0:00] — Grand Tome World 1: Tribalstack Tropics — Can be unlocked after you receive the rolling move by rolling up the ramp to the right-hand side of the Hivory Towers area.
• [0:37] — Grand Tome World 2: Glitterglaze Glacier — Can be unlocked by going to the golden statue and roll up the ramps on the left-hand side of that area until you reach the top. There you can buddy slam the yellow button in order to get through the get. Once you go through it, you’ll trigger the first quiz of the game. Follow the hallway in Hivory Towers until you find Trowzer red snake who gives you a free move to fly and hold the fly button to glide across gaps. Use this move to follow the snowy path to the next Grand Tome book. (You’ll need to talk to Trowzer in each next area, since he sells you the moves you need to access the last 3 worlds.)
• [2:38] — Grand Tome World 3: Moodymaze Marsh — Can be unlocked by picking up the ice pellet plant from the back room to open the gate into the Archive room to buy the underwater bubble move from Trowzer. Use it in the aquarium in the middle to press the yellow button that opens up the secret bookcase door.
• [5:39] — Grand Tome World 4: Capital Cashino
• [8:02] — Grand Tome World 5: Galleon Galaxy

There are no Yooka-Laylee cheats on Xbox One, PS4, PC, Mac & Switch yet. So until they are discovered, we made the handy Yooka-Laylee guides listed above to help you with tips and tricks for the game!

Do you know of any Yooka-Laylee cheats or unlockables?
Let us know in the comments, you’ll get credit for finding out. – Thanks for visiting!