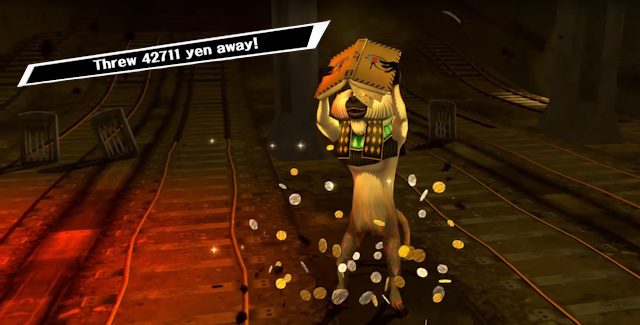 This Persona 5 money cheat for easy Yen will show you how to collect quick cash by taking advantage of a rare item & a money farming trick in the PS4 & PS3 RPG game.

As always with cheats involving in-game currency, use at your own discretion.

Here’s an easy way to get a lot of money very fast in Persona 5. Using this money cheat you’ll be able to get unlimited cash, as explained below…

Money Cheat Location: How to get unlimited Yen? It can be done by gathering lots of rare gear items. In turn, the money you get from selling them at Pawn Shops can be used to buy what you need right away.

• Step 1: Here’s how to get a vast amount of money really quick at the beginning of Persona 5. As you progress through the story, after you save Ann Takamaki from the palace, follow Ryuji on Shibuya Central Street to the pawn shop where you can buy weapons, armor & accessories. Now you know the location of the pawn shop where you can sell expensive items for lots of cash.

• Step 2: Continue Ann’s palace quest. After completing the part of the scenario where you unlock Ann’s Persona, during this adventure you’ll come across a room with a HUGE chest in it. Open up the chest to receive the Soma item that replenishes your entire team’s HP & SP upon use. Most of the Soma time you’ll get that item, but not always; reload to replay the quest if you didn’t get it the first time.

• Step 3: Once you have a Soma, go back to the Shibuya Central Street pawn shop. Talk to the ‘Surley Manager’ shop manager and go into the “Sell Items” menu to sell each Soma you have for 50,000 cash!

Additional ways to get more Soma is by A) Looting items from enemies, B) By going deeper into the first dungeon, C) Get one from a Shadow, and D) an extra Soma is part of the free “Healing Item Set” DLC.

If you ‘confuse’ a Memento Request Boss, the boss start throwing loads of money of you. This is WITHOUT any money-boosting stuff obtained. In addition to this, it’s fairly early in the game. You can do it for the first time before even finishing the 3rd dungeon and you can probably do the same things with other Memento Requests before that.

The one shown in the video guide below is the Memento Boss to unlock the fortune-teller confidant. This will net you 20,000 Money per turn!

Money farming cheat for later in the game:

Money Farming Method: This is probably the best Persona 5 money farming method. You can farm money while doing other stuff because it doesn’t require your attention and you can farm lots of money. It’s both easy and efficient. It gives you 40,000 up to 170,000 Yen per turn.

Get Onmoraki (Onion Chicken persona) to level 15 to learn Confusion Boost + Pulinpa.
Fuse Onmoraki onto a Persona of your choice (Higher luck is better, as it gives more money. You don’t necessarily need a strong persona as you can farm in easy difficulty, but if you want then fuse into a persona that resists whatever you want and inherit Confusion Boost + Pulinpa.
Level up the resulting persona through Gallows Fusion using the highest level Gem persona you can summon as fodder.
After each Gallows Fusion, you have to register the persona, delete it (itemization or fodder) and then resummon it again (the game doesn’t let you strengthen a single persona more than once).

After you finish all your money, wait until you have like 3 memento requests (not all memento bosses can be confused), change your difficulty to easy, equip a SP regen accessory if you have it and remove everyone apart from protagonist from your party (turns go faster this way).
Find the memento boss and confuse it, then keep guarding until you have to confuse again. The boss will start throwing money at you (or items or nothing) based on your Luck. You shouldn’t take a lot of damage and can keep doing it while doing other stuff (Triangle then Cross to confuse, Circle then Cross to guard).

Thanks for visiting! And feel free to leave a comment if you have any cheats and tips of your own and we’ll add it to this guide and give you credit. 🙂