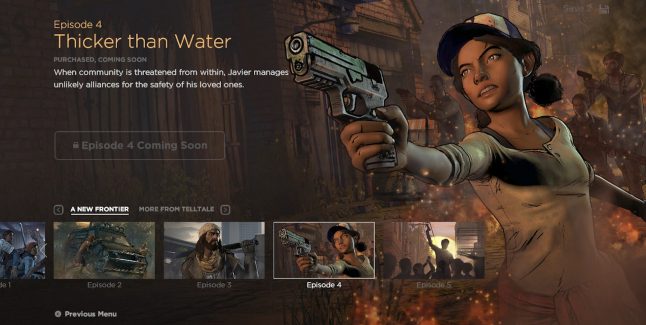 What is the The Walking Dead Game Season 3: Episode 4 release date? During a Reddit AMA about The Walking Dead Telltale Games has confirmed that The Walking Dead: A New Frontier – Episode 4 (titled “Thicker Than Water”) release date is planned “in April”, meaning it’ll come out by Tuesday April 25th, 2017 at the latest (officially confirmed!). – That date is a worldwide release on PC, Mac, PS4, Xbox One, with iOS & Android mobile all coming in the same week.

To quote Telltale Games’ Head of PR, Job Stauffer: “We’re finishing up the episode now, and are super close to submitting. It’s March 31st now, and tomorrow is April 1st. Our goal us to have you playing Episode 4 in April, and ideally, playing Episode 5 sometime in May. These aren’t official dates just yet, but you can rest assured that the wait for 4 and 5 will be much shorter than the wait for ep 3. 🙂 ”

The Episode 4 chapter names hint at what events to expect:
• Chapter 1: Faces in the Crowd
• Chapter 2: Across the Water
• Chapter 3: Prayers for the Dead
• Chapter 4: Blood for Blood
• Chapter 5: Smoke and Fire
• Chapter 6: The Price of Justice

Season 1 Description: “The Walking Dead: The Telltale Series – A New Frontier will act as both a new beginning for players fresh to the series and unfamiliar with Clementine, as well as a continuation for players who have experienced Seasons One and Two. Players new to the series will be able to start a story that is tailored to this new beginning. Players continuing onward from prior seasons will have multiple options for quickly configuring their tailored backstory, or importing past save files from various platforms.

When family is all you have left… how far will you go to protect it? After society was ripped apart by undead hands, pockets of civilization emerge from the chaos. But at what cost? Can the living be trusted on this new frontier?

Here’s an interview with the Telltale staff about The Walking Dead Game Season 3:

Go Behind the Scenes: Hear from writers, designers, and developers that worked on The Walking Dead: A New Frontier talk about Clementine and Javier’s story!

Up next is ‘The Walking Dead: A New Frontier’ Extended First Look that talks about what you can expect in this new five part series:

In this first look at ‘The Walking Dead – A New Frontier’, we meet Javier. We witness how the beginning of the zombie plague affected him and his family before we move forward in time to years later, where he encounters a very familiar face…

“And therefore never send to know for whom the bell tolls; It tolls for thee.”

Future Updates: This section is reserved for future updates like Episode 4 screenshots and the Episode 4 launch trailer.

What do you think will happen on the next episode of The Walking Dead Game Season 3?