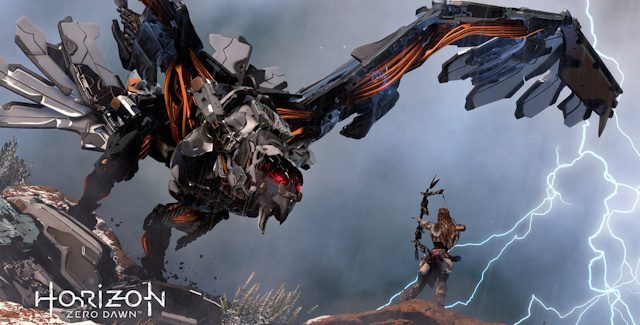 The Horizon Zero Dawn trophies guide lists every trophy for this PS4 action-RPG game and tells you how to get and unlock them all.

In the Horizon Zero Dawn trophy guide we’ll show there are 56 Trophies (42 Hidden Trophies) that can be earned in the PS4 title. Earn Bronze (48), Silver (5), Gold (2), and Platinum (1) Trophies to increase your Gamer Level.

Here’s a quick introduction explaining How to get all trophies in Horizon Zero Dawn. How to get all optional allies, collectibles and which side quests you need to get the platinum trophy.

3. 3 Strikes From Above (Bronze) — Killed 3 enemies using the Strike from Above skill.

8. Downed 23 Grazer dummies (Bronze) — Found and knocked over all of the Grazer training dummies in the Nora region.

Tip: There are 23 Grazer training dummies in total. Specific locations are listed for the visual guide below.

9. First Modification (Bronze) — Used a Weapon Coil or Outfit Weave on a modifiable weapon or outfit.

17. All Recon machines killed (Bronze) — Killed at least one of every type of Reconnaissance machine.

21. First Bandit Camp cleared (Bronze) — Took back a settlement from a bandit clan.

22. First Core Overridden (Bronze) — Reached the Core of a Cauldron and accessed its information.

23. All Suns at one Ground (Bronze) — Earned at least a Half Sun mark in all three trials at one Hunting Ground.

24. Blazing Suns at one Ground (Bronze) — Earned a Blazing Sun mark in all three trials at one Hunting Ground.

26. All Tallnecks Overridden (Silver) — Scaled all of the Tallnecks and accessed their information.

27. Cleared all the Bandit Camps (Silver) — Took back all settlements from the bandit clans.

28. All Cores Overridden (Silver) — Reached the Core of every Cauldron and accessed the information within.

29. All Suns at all Grounds (Silver) — Earned at least a Half Sun mark in all trials at all of the Hunting Grounds.

30. Blazing Suns at all Grounds (Gold) — Earned a Blazing Sun mark in all trials at all of the Hunting Grounds.

32. All machines catalogued (Bronze) — Encountered and Focus scanned every type of machine.

Tip: All above mentioned collectibles can be easily found if you find a special merchant that sells maps, as shown in this video guide.

41. Got the Shield-Weaver outfit (Bronze) — Recovered an ancient technology and put it to use [by finding all 5 Power Cells and bringing them to the Ancient Armory].

49. Broke the siege of All-Mother (Bronze) — Defeated the invaders and went inside the sacred mountain.

53. Victorious with the War-Chief (Bronze) — Found the Nora War-Chief and defeated the killers in the Ring of Metal.

55. Aided the defectors (Bronze) — Aided the escapes of Uthid and the child king Itamen from the Shadow Carja.

Special thanks to Sony, XCV & PS4Trophies for the list, tips & guide videos.

Please comment if you have any Horizon Zero Dawn trophy unlock tips of your own. Kudos will be given. – Thanks for visiting!