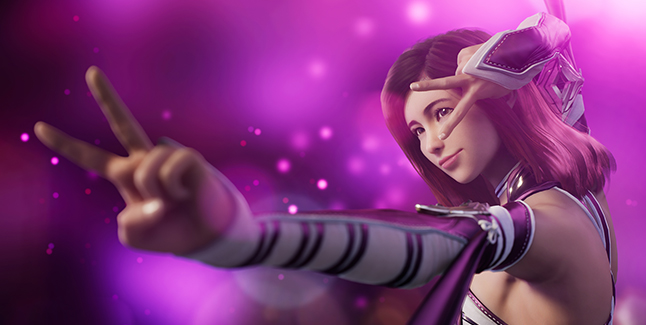 Epic Games has announced the latest Hero, Shinbi, for its free-to-play PC and PlayStation 4 MOBA, Paragon. Shinbi will be available for free this coming Tuesday, February 21

A world famous pop star known for summoning Spirit Wolves during her performances, Shinbi is a deceptive melee assassin who uses her wolves to dazzle her enemies and rip them to shreds in battle. Get your first look at the extraordinary pop star in the announcement video and get a closer look at her abilities with the ability overview video; a detailed list of her abilities can be found below:

Rushing Beat – Shinbi dashes forward passing through enemies and dealing damage, she can also re-trigger quickly after to dash again

Line Tempo – A Spirit Wolf is summoned and runs out in a straight line, passing through minions and dealing damage. The wolf explodes on contact with an enemy Hero

Circle Rhythm – Shinbi summons four Spirit Wolves that circle her for 4 seconds, which deal damage and heal Shinbi for each hit

All-Kill! – Passive: All of Shinbi’s abilities apply +1 Spirit Wolf stack per hit to enemy Heroes, building up to eight stacks. Active: When activated a pack of Spirit Wolves attack the closest target with the highest number of Wolf stacks, sending one Wolf per stack.