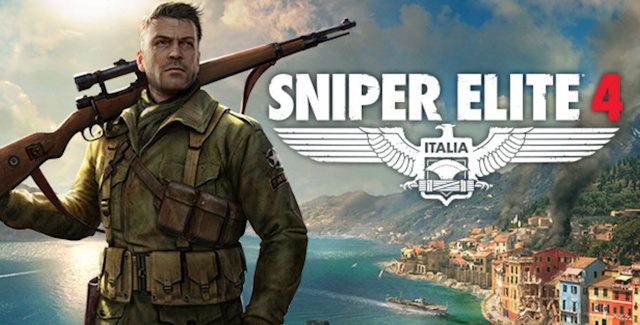 This Sniper Elite 4 walkthrough will guide you through the beginning to ending moments of gameplay with strategy tips for this stealthy third-person tactical shooter game on the PC, PS4 & Xbox One.

Let’s start the Sniper Elite 4 walkthrough with a 101 introduction video!

Please note that viewers must be at least 16 or 18 to watch, in Europe & America respectively, so no harm comes to those with innocent eyes. This game includes Blood and Gore, Intense Violence, Language.

Discover unrivalled sniping freedom in the largest and most advanced World War 2 shooter ever built. Experience tactical third-person combat, gameplay choice and epic longshots across gigantic levels as you liberate wartime Italy from the grip of Fascism.

Covert agent and elite marksman Karl Fairburne must fight alongside the brave men and women of the Italian Resistance and defeat a terrifying new threat with the potential to halt the Allied fightback in Europe before it’s even begun.

Welcome to the Sniper Elite 4 walkthrough!

GameRiot will be your voice-over commentator showing you around the game’s areas.

Mission 1 Objective: Following the destruction of the Allied spy ship the orchidea, you’ve been dispatched to the secluded island of San Celini to the south-west of Italy. Your mission is to assassinate Luftwaffe General Tobias Schmidt, as well as four high-ranking Nazi officers, and find out all you can about the Nazis’ plans for their latest wonder weapon…

Mission 2 Objective: The once idyllic town of Bitanti lies in the shadow of the sadistic Nazi General Heinz Bohm. On Bohm’s instructions, the local Nazi garrison have recently purged the town of resistance, and are about to execute the remaining Partisan prisoners. You must venture into the town at the ruined castle and find the leader of the resistance, the mysterious Angel…

Mission 3 Objective: The lethal Railway Gun sits on the Viaduct and poses an ongoing threat to Partisan troops and to any Allied forces that might come this way. The Partisans need you to neutralise the Railway Gun in any way you see fit — and British Intelligence need you to investigate a crashed reconnaissance plane before the Nazis can recover the footage it took…

Mission 4 Objective: An Allied reconnaissance plane has spotted mysterious shipments being brought into Lorino Dockyard. Your job is to sneak in under the cover of darkness and discover just what the Germans are up to. Find out what the shipments contain and where they’re being sent, then prepare the area for a covert Allied bombing raid.

Mission 5 Objective: American Intelligence think the Mafia could be useful Allies against the Nazis. To prove your loyalty the Mob want you to kill Piero Capo, the leader of the local Black Brigade. They also want you to identify which vehicles are carrying artworks out of the Monastery so they can deal with them. Meanwhile, German artillery guns are a threat that must also be dealt with as Allied invasion plans gather momentum…