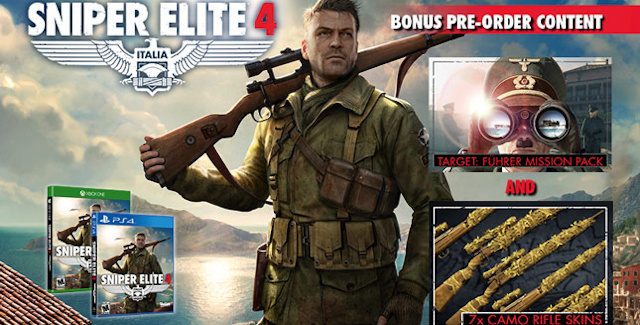 Here we will show you how to unlock all Sniper Elite 4 codes with a cheats list that’s valid for the PC, PS4 & Xbox One versions (where available).

Pre-order Sniper Elite 4 and receive the Day One Edition with free DLC, which includes the Target Führer Mission and Camouflage Rifles Skin Pack.

• Target Führer – Hidden in a forgotten corner of the Mediterranean, a secret Nazi U-boat facility threatens Allied shipping. When agent Karl Fairburne attempts to assassinate the base’s Commander, he finds his target already dead, executed in person by a shadowy visitor. Karl’s mission has changed: Target Führer! Destroy the U-boat base and take down Hitler in as many ways as you can in this replayable campaign mission for 1-2 players.

• Camouflage Rifles Skin Pack – In a sharpshooting duel to the death, any advantage could make the difference between victory and defeat. Apply highly detailed camouflage wraps to your rifles, breaking up their silhouette and blending them into the lush combat environments of WW2 Italy. Weapon skins can be used to customize all seven of Sniper Elite 4’s starting rifles for use in any singleplayer, co-op or multiplayer mode.

During the following E3 2016 interview with Sniper Elite 4 developers Tim Jones and Robbie Cooke, you learn about the game world of Sniper Elite 4 and see the new down-the-scope gameplay from this anticipated sequel.

Lucy and Scott get some gameplay tips and tricks from the creators of this tactical shooter title themselves.

Up next, Mike plays some Sniper Elite 4 where we rejoin hero Karl Fairburn, the man Nazi t*sticles have bad dreams about at night. This time he’s in Italy, pretty much single-handedly dismantling the Nazi war machine one pair of plums at a time.

Though the gory X-Ray kill cams are still the main attraction, Sniper Elite 4 introduces new elements such as competitive multiplayer gameplay and a co-op horde mode, in addition to the cooperative campaign mode. And yes, kill cams get spruced up as well, with new melee, explosion, shrapnel and trap kill cams.

These old Sniper Elite cheats may work again in all versions of Sniper Elite 4, although it’s unconfirmed (and unlikely).

When choosing a profile name, enter the following names, as these names act as codes to unlock cheats.
The profile name to type as your profile name is followed by the in-game effect.

There are no Sniper Elite 4 cheats on Xbox One, PS4 & PC yet. So until they are discovered, we made the handy Sniper Elite 4 guides listed above to help you with tips and tricks for the game!

Do you know of any Sniper Elite 4 cheats or unlockables?
Let us know in the comments, you’ll get credit for finding out. – Thanks for visiting!