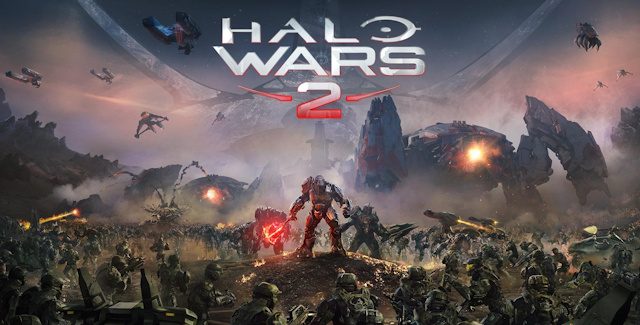 This Halo Wars 2 walkthrough will guide you through the beginning to ending moments of gameplay with strategy tips for this RTS game on the Xbox One & PC.

Let’s start the Halo Wars 2 walkthrough with an introduction video!

Please note that viewers must be at least 13 to watch, so no harm comes to those with innocent eyes. This game includes Mild Blood, Mild Language, Violence.

The heroes of Halo Wars return to find themselves – and the galaxy – in more danger than ever.

Following the events of Halo 5, the all-new story is told in 12 action-packed missions set on the legendary Halo destination known as the Ark.

After decades adrift and declared “lost with all hands,” the brave crew of the UNSC Spirit of Fire are mysteriously awoken above an ancient Forerunner haven known as the Ark. In Halo Wars 2, Captain Cutter and his crew will face one of humanity’s most formidable threats yet: The Banished – a fierce and powerful Brute faction led by a cunning and lethal warrior known as Atriox.

Halo Wars 2 delivers real-time strategy at the speed of Halo combat. Get ready to lead armies of Spartans and other Halo fighting forces like Warthogs, Scorpions and exciting new units in a brutal war against a terrifying new enemy on the biggest Halo battlefield yet.

Welcome to the Halo Wars 2 walkthrough!

Roflness will be your voice-over commentator showing you around the game’s areas with strategic tips to beat each mission on Legendary difficulty.

Mission 1 Primary Objective: Reach the source of the signal.

Mission 2 Primary Objective: Lead the UNSC in an assault against Decimus’ (one of Atriox’s chief lieutenants) salvage operation. Clear the Banished camps.

Halo Wars 2 Walkthrough continues on Page 2 with Mission 6: Lights Out.