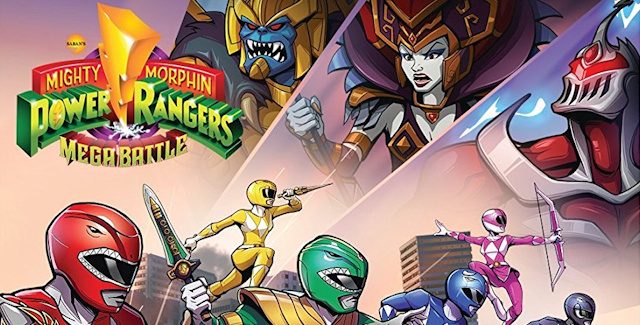 Go Go Power Rangers! The Mighty Morphin Power Rangers: Mega Battle walkthrough will guide you through the beginning to ending moments of gameplay with strategy tips for this beat-em-up game on the PS4 & Xbox One.

Please note that viewers must be at least 10 to watch, so no harm comes to those with innocent eyes. This game includes Fantasy Violence.

Saban’s Mighty Morphin Power Rangers: Mega Battle provides a creative and modern re-imaging of the classic multiplayer beat-em-up genre. Level up your rangers, team up with friends (couch co-op thanks to local multiplayer up to 4 players), summon the Megazord, and fight your way through levels stylized after classic Mighty Morphin Power Rangers episodes!

Gamerzombie will be your guide showing you around the game’s arcade levels.

Play as Jason, Trini, Kimberly, Billy, Zack, Tommy (Green and White), Adam, Kat, Rocky and Aisha in this game. They have levels which are based on the old Mighty Morphin Power Rangers episodes. As our story begins mysterious towers have been placed all around Angel Grove, thus forcing the Power Rangers to jump into action, Megazord battles and all.

Tip: Morphing into a Power Ranger will knock down enemies.

Part 2 of Stage 2 Objectives: The Fair Brawl. Clash on the Coast. Complete the Boss Battle against Turban Shell.

Protip: You can throw enemies by pressing the right shoulder button. Try to throw enemies off a ledge! This will save time to kill them instantly instead of killing them off through a longer fight.

Stage 3 Objectives: Defend the rooftops. Inside the Tower. In the Control Room complete the Boss Battle against Lord Zedd.

Stage Tip: In order to get past the Bulls, use the Roll Dodge move when they charge you. Then when they are stunned jump attack them with combos.?

Stage 4: Back To Nature

Hint: While you’re grabbing weak enemies, you can perform a team move with other players.

Note: Rear attacks take down enemies behind you automatically.

Stage 6: Fight For The City & The Ending

Stage 6 Objectives: Covering United we Stand, The Battle of Angel Grove, and The Sky Opened Wide. Get ready to complete the Final Boss Fight against Lord Zedd!

Thanks to Bandai Namco & Gamerrzombie for the walkthrough videos.