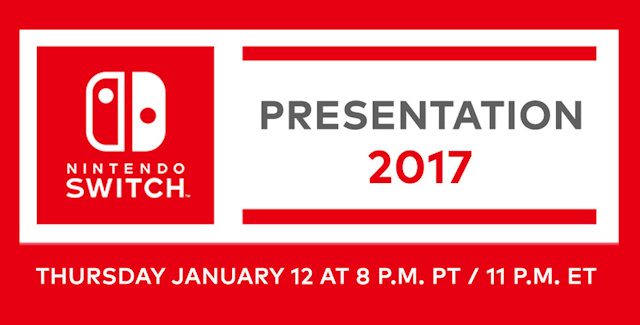 Watch the Nintendo Switch Presentation 2017 Live Stream here. The global livestream airs on January 12, from Tokyo, Japan at 1AM local time. Which means everywhere else it starts at 11:00 PM ET / 8:00 PM PT / 4:00 AM GMT (with it already being January 13 in Europe at that time). Be there for the full Switch console-handheld reveal, along with expected gameplay for all the launch games! So exciting! 😀

You can watch the Nintendo Switch Presentation livestream here: (starts at 33 minutes)

Tip: If you want to see more gameplay of these new Switch titles beyond the sneak peek this Nintendo Switch Presentation from Japan will give you, then it’s recommended you watch another official global livestream called the “Nintendo Treehouse Live with Nintendo Switch” that airs from America starting on January 13, at 9:30 AM ET / 6:30 AM PT / 2:30 PM GMT.

During the Japanese Presentation that will be dubbed in English so everyone can follow along, you can expect to see some quick looks at gameplay for titles teased in the reveal trailer last year*. Including new titles like The Legend of Zelda: Breath of the Wild, “Super Mario Switch” and enhanced ports like Mario Kart 8, Splatoon, The Elder Scrolls V: Skyrim – Special Edition, Lego City Undercover, NBA 2K17, Just Dance 2017 & Shovel Knight. Along with a dozen new reveals and some Virtual Console titles.

– Paid online service free at launch, but paid after trial period, although you do get 1 NES or SNES Virtual Console game with added online multiplayer for free every month as part of the paid subscription. Note that playing classic games online is huge, but sadly the wording implies each monthly game is only free for one month, price should be cheap.

– Online Service has smart device connection to voice-chat with friends, to quote: “Our new dedicated smart device app will connect to Nintendo Switch and let you invite friends to play online, set play appointments, and chat with friends during online matches in compatible games-all from your smart device. A free, limited version of this app will be available for download in summer 2017. – The paid online service will be available in the U.S., Canada, and Mexico only at launch.”

New games including those made for the HD Rumble in the new Joycon controller:

– “1-2-Switch” mini-games collection with western style shooting gallery that can be played without the screen against your opponent. Available at launch on March 3, 2017.
– “ARMS” combined boxing with shooting for aiming the Joycons to extend your boxing gloves to hit your opponent; Moving your wrist will be tracked by the Joycon to influence. Solo or Split-screen. And online battles as well. Spring 2017 release date.
– “Splatoon 2” now has double-wielding. This is not an enhanced Wii U port, but a full sequel. 4 VS. 4 battles locally & online. Works with Joycons & Pro Controllers. Summer 2017 release date. More new stages and other DLC will be coming post-launch.
– “Super Mario Odyssey” where Mario visits both human and mushroom kingdom towns. As a total surprise, Princess Peach is once again kidnapped by Bowser & his boss allies. Large Mario sandbox world to explore unknown countries. Mario’s red cap has eyes, when Mario throws it it can serve as a platform for him to jump on. Release date is Holiday 2017.
– “Xenoblade 2” trailer shows cutscenes & gameplay. Xenoblade gets a sequel by Monolith Software.
– “Fire Emblem Warriors” being made by Tecmo-Koei & Team Ninja. On January 18 there will be a Fire Emblem-themed Nintendo Direct.
– Mario Kart 8 Deluxe has all the DLC and adds no new racing courses compared to the Wii U version including all its DLC Packs, but the Switch version does add new characters, new karts, and a true new Battle Mode! Coming April 28, 2017. The 5 new characters are Inkling Boy, Inkling Girl, King Boo, Bowser Jr. and Dry Bones. The 3 new karts are: Splat Buggy, Inkstriker, and Koopa Clown Car. Two item slots available. Drive Assist mode allows you to play with young kids, so you don’t have to worry about them falling off the course sides. Game is 1080p 60FPS in console mode, and 720p 60FPS in handheld mode. The new Battle Mode has the SNES Feather powerup item, has new Urchin Underpass map. Still no return of N64 Block Fort?
– 80 games in development for Switch.
– Dragon Quest X, Dragon Quest XI, and Dragon Quest Heroes 2 from Square Enix coming to Switch in Japan
– Project Octopath Traveler in 16-bit Final Fantasy 2.5D style by Square Enix.
– Shin Megami Tensei new game in the series confirmed for Switch by Atlus.
– NIS confirmed a Disgaea 5 Complete port for Switch.
– Sega working on new concept for Switch; Already confirmed Sonic Mania and Sonic Project 2017 for Switch.
– Skyrim is fully confirmed for the Switch with new gameplay shown.
– Grasshopper Manufacture working on new Travis Touchdown “No More Heroes” game for Switch.
– EA bringing this sports game to the Switch: EA Sports FIFA 17.
– Capcom bringing Ultra Street Fighter II: The Final Challengers that adds new characters like Evil Ryu and Violent Ken debuts. Release, price and new modes will be announced by Capcom later.
– Ending trailer shows other new games like: Minecraft: Switch Edition, Just Dance 2017, NBA 2K18, Telltale’s Minecraft: Story Mode, Skylanders: Imaginators, Rayman Legends: Definitive Edition, Lego City Undercover, Dragon Ball Xenoblade 2, Farming Simulator 2017, RIME, Steep, Fast RMX (Fast Racing Neo 2), Has-Been Heroes, I Am Setsuna, Nobunaga’s Ambition Power Kit (for Japan).
– Switch eShop games shown in post-show trailer include 4-player Super Bomberman R, Puyo Puyo Tetris S, and a “Snipperclips – Cut it out, together!” cartoony co-op puzzle game.
(not mentioned were Redout, The Binding of Isaac: Afterbirth+, Yooka-Laylee or Tank It!)
– The Legend of Zelda: Breath of the Wild release date is March 3, 2017 at the Switch launch worldwide! Super hype trailer shows the entire cast has voice-overs, except for Link of course.
Switch Box: Two versions of the Switch system available at launch at the same price, with the only difference being either black Joycon controllers or blue & red Joycon controllers in the box.

I’m hyped for the Nintendo Switch! Will you be watching the livestream?