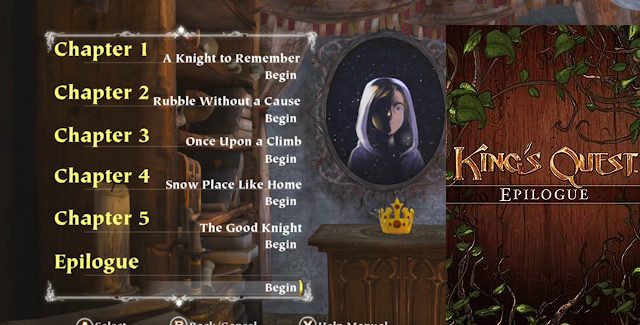 The King’s Quest 2015: Epilogue walkthrough will guide you through the beginning to ending moments of gameplay with puzzle solutions and strategy tips for this episodic adventure game on the PC, PS3, PS4, Xbox 360 & Xbox One.

How To Unlock The Epilogue / Chapter 6: This 96MB download became available from December 20th, 2016 exclusively for players that have bought “The Complete Collection” digital or retail (disc) versions of King’s Quest.

King’s Quest is a collection of five different chapter releases, each focusing on an untold tale in Graham’s past. In each chapter, an aging King Graham reflects on his life of adventure with his granddaughter, Gwendolyn. – King’s Quest is a five-chapter story arc with an additional playable sixth mini-chapter called The Epilogue that changes the main character from King Graham to Gwendolyn.

Developed by The Odd Gentlemen, King’s Quest rekindles the classic feelings of exploration, wit and wonder that have always defined this family-friendly series since its introduction over 30 years ago. – The final entry in a planned five-chapter arc, King’s Quest continues the unforgettable journey to come with original places, puzzles and personalities to discover.

Chapters Download Note: If you bought the “King’s Quest: The Complete Collection”, DO NOT repurchase this version of the game or you will be charged again.
“King’s Quest – Chapter 1: A Knight to Remember” is required to be installed in order to play this content.

In this bonus chapter, there are no achievements / trophies to unlock.

All Puzzles Solved: Covered are…
– Here’s how to get Snutes Stomp somewhere else. Set trap for Yarblesnoofs; Find Yarblesnoofs food. Scout Rule 14; All creatures are wary of the unnatural, you just need a mask. And finally, where to get Sugarshrooms.

To Be Continued: The End? I imagine there will be a King’s Quest: Season 2 with the adventures of Queen Gwendolyn. Or would that be called Queen’s Quest? 😀

Thanks to Sierra & GamerrZombie for the tips & walkthrough videos.