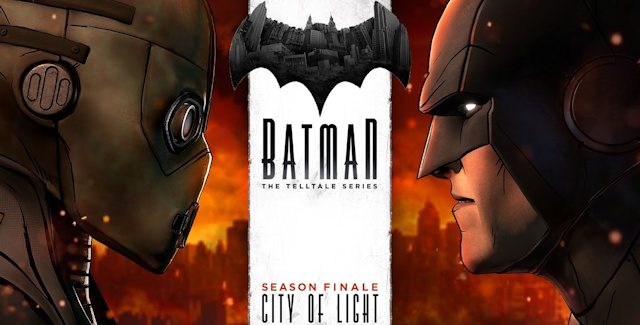 The Batman: The Telltale Series Episode 5 walkthrough for “Episode 5: City of Light” will guide you through the beginning to ending moments of gameplay with strategy tips for this graphic adventure game on the PC, Mac, PS4, Xbox One, PS3, Xbox 360 & Mobile (iOS and Android-based devices).

Please note that viewers must be at least age 18 to watch. Fair warning given because the game includes Extreme Violence, Blood, Sexual Themes, Language, Use of Drugs, Crazy Joker Laughter.

Batman: The Telltale Series Season One is a five part episodic game series.

Includes access to all five episodes in this all-new series from the award-winning studio, Telltale Games.

Welcome to the Batman: The Telltale Series Episode 5 walkthrough!

Doug, XCV & Gamerzombie will be your guides showing you around the game’s chapters.

Below you’ll find both playthroughs’ endings based on the different choices made last episode.

Special Note: Players will leave this episode in very different places depending on where they choose to go in the third and fourth act, and this will greatly affect their story in this season finale.

Synopsis: In Episode 5: ‘City of Light’, things are not going well for The Caped Crusader. The Children of Arkham are finalizing their plan to destroy the Wayne family name, Gotham is being torn apart by familiar forces, and allies begin to show their true colors. With threats mounting around every corner, The Dark Knight’s identity and those closest to him are caught in the crossfires of vengeance. Which mask you choose in your fight for justice – The Man or Batman – will determine the fate of Gotham.

Episode 5: City of Light walkthrough that contains the full Episode 5 and ending.

All Endings walkthrough for Episode 5:

Overview for all Alternative Choices in Batman: The Telltale Series Episode 5 – “City of Light”:

Next Season: Please join our upcoming “Batman: The Telltale Series Season 2 Release Date” discussion about what will happen next season.

Thanks to Telltale Games, Doug, XCV, Gamerzombie & AFguidesHD for the walkthrough videos.