The European Collector’s Edition for Resident Evil 7 biohazard is available to pre-order from today and includes an array of themed items for players to get their fingers on. 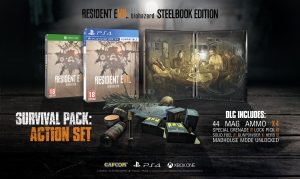 • An alternative inlay for your copy of the game

• Survival Pack: Action Set DLC – which includes a number of useful consumable items and an instant unlock of the challenging ‘Madhouse’ difficulty setting

The Resident Evil 7 biohazard Collector’s Edition is available to pre-order in the UK at GAME and Amazon.co.uk only, while a Steelbook Edition for the game is also available to pre-order exclusively at GAME. The Survival Pack: Action Set DLC is exclusive to the Collector’s Edition and Steelbook Edition of Resident Evil 7 biohazard.