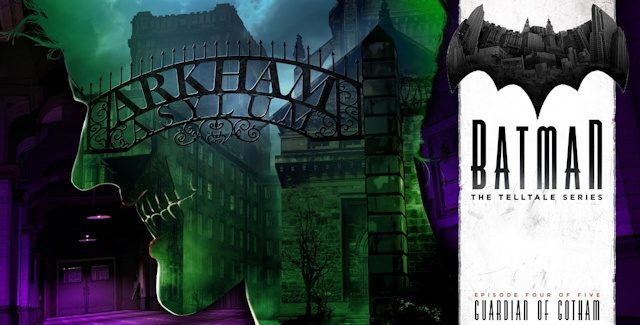 The Batman: The Telltale Series Episode 4 walkthrough for “Episode 4: Guardian of Gotham” will guide you through the beginning to ending moments of gameplay with strategy tips for this graphic adventure game on the PC, Mac, PS4, Xbox One, PS3, Xbox 360 & Mobile (iOS and Android-based devices).

The full Batman: The Telltale Series Episode 4 walkthrough is being livestreamed by Doug right now!

Please note that viewers must be at least age 18 to watch. Fair warning given because the game includes Extreme Violence, Blood, Sexual Themes, Language, Use of Drugs, Crazy Joker Laughter.

Welcome to the Batman: The Telltale Series Episode 4 walkthrough!

Doug is your voice-over commentator showing you around the game’s chapters. – He’ll mostly make all the nice-guy choices.

Below you’ll find both playthroughs’ endings based on the different choices made. The alternate ending path depends on where Batman chooses to go: A) To Wayne Enterprises; or B) Instead he goes to deal with the Penguin.

Special Note: Players will leave this episode in very different places depending on where they choose to go in the third act, and this will greatly affect their story rolling into the season finale as well.

Synopsis: In this penultimate chapter, things have gone from bad to worse for The Dark Knight due to the shocking events of Episode 3: ‘New World Order’. Penguin has taken control of Wayne Enterprises, and the Elizabeth Arkham Asylum for the Criminally Insane has a new guest – you – Bruce Wayne. With the Batman removed from the streets of Gotham City, Harvey Dent’s forces and the Children of Arkham are at war, with innocent citizens caught in the crossfire. To escape the ‘comforts’ of your padded cell, you must choose allies to aid in your escape, even if they aren’t the sort to put a smile on your face. How far are you willing to go for justice? For vengeance?

It’s another tense, action-packed episode featuring a first appearance by a grinning future adversary… The Joker!

The Episode 4 chapter names are:

• Chapter 1: Price of Admission
• Chapter 2: A Serious House
• Chapter 3: Home Sweet Home
• Chapter 4: Back to Business
• Chapter 5: Another Night at the Office
• Chapter 6: The Good, the Bat, and the Ugly

All Endings walkthrough for Episode 4:

Overview for all Alternative Choices in Batman: The Telltale Series Episode 4 – “Guardian of Gotham”:

Next Episode: Please join our “Batman: The Telltale Series Episode 5 Release Date” discussion about what will happen in Episode 5: City of Lights.

Thanks to Telltale Games, Doug & AFguidesHD for the walkthrough videos.