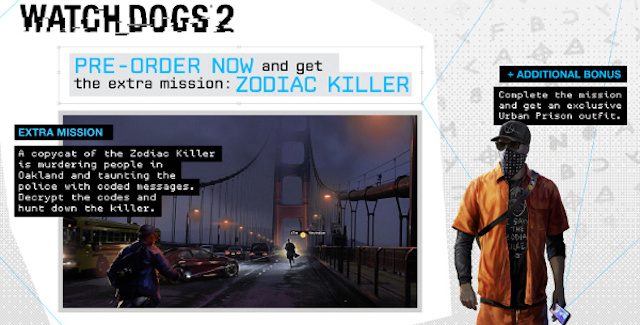 Here we will show you how to unlock all Watch Dogs 2 codes with a cheats list that’s valid for the PC, PS4 & Xbox One versions (where available).

Before you start playing Watch Dogs 2, be sure to login to your existing Uplay / Club Ubisoft Account via the game’s Main Menu, by selecting “Uplay” / “Club Ubisoft”. If you’re not registered yet to Ubisoft’s official rewards service, then first sign up for an account at Club.Ubisoft.com.

Once signed in, Club Ubisoft rewards you for playing Watch Dogs 2 with a range of exclusive free content. Which is a fancy way of saying Club Ubisoft gives you access to unlockable cheats & extra items in Watch Dogs 2.

Note: To get newly unlocked vehicles delivered near you, open your in-game smartphone by pressing up on the Directional-Pad, go to the Car On Demand App and then select the vehicle you want.

Complete the following actions (lists needs to be updated post-launch) to receive Club Ubisoft Points, which you’ll be able to spend to unlock the Club Ubisoft Rewards mentioned in the second list below.

These are all the extras you can unlock in the game if you have enough points to spend in your Club Ubisoft account, either from doing the actions listed above or from playing other Ubisoft games.

Note: Through this Ubisoft page you can get even more rewards for certain actions (outside of Uplay / Club Ubisoft). Simply go to the page, select “Join Dedsec”, and do the activities like watching videos. Then redeem your points you’ve earned for exclusive outfits for your character, plus more like skins and cars! Outfits currently available in the USA, available globally soon.

Note: In every Hideout there’s a Wardrobe where you can change into new clothing that you’ve unlocked for the game.

The pre-order Bonus with all Editions includes:

• The “Zodiac Killer Mission“: Pre-order now and get access to an extra mission: Zodiac Killer. — An unwanted ghost of San Francisco’s past has resurfaced after fifty years. A killer is staging the bodies of his victims all over Oakland like the infamous Zodiac Killer of the Sixties, and he’s taunting the police and news outlets with coded messages. Will you succeed in decrypting the messages and hunting down the copycat?

The Bonus Pack with Deluxe Editions is:

• The “Deluxe Pack“: The Deluxe Pack gives you 2 personalisation packs with outfits for Marcus and skins for his car, drone and weapon.

The Season Pass DLC add-ons include: (also comes with the Gold Edition)

There are no other Watch Dogs 2 cheats on Xbox One, PS4 & PC. So until more are discovered, we made the handy Watch Dogs 2 guides listed above to help you with tips and tricks for the game!

Do you know of any Watch Dogs 2 cheats or unlockables?
Let us know in the comments, you’ll get credit for finding out. – Thanks for visiting!