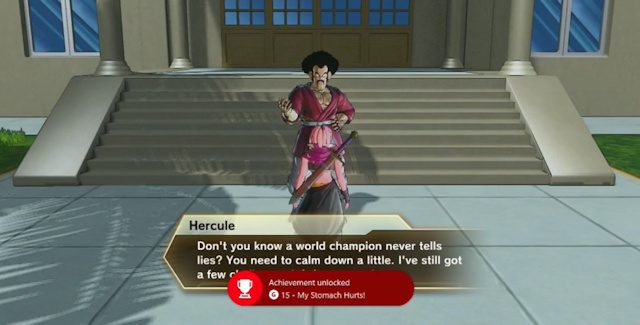 The Dragon Ball Xenoverse 2 achievements guide lists every achievement for this Xbox One & PC fighting game and tells you how to get and unlock them all.

In the Dragon Ball Xenoverse 2 achievement guide we’ll show there are 50 Achievements (2 Secret Achievements) with a total of 1,000 Gamerscore points to earn in the Xbox One and PC versions.

Tip: Find out where they are in our “Dragon Ball Xenoverse 2: How To Get Dragon Balls & Summon Shenron” guide.

Requirements: With any race complete Majin Buu’s quest. Afterwards you can feed Majin Buu at his Buu’s House 6 times (food like potatoes, fish & water that can be found in the area) until he gives birth to a Majin Buu baby. Now feed this baby once to get it to fetch items for you, once it returns in a few hours (after 2, 3 or 4 hours) you can feed it again, make sure to feed it multiple times so it transforms itself into a different color. This will trigger the achievement to unlock.

33. The Righteous Must Flourish! (30G) — Become a student of the Great Saiyamen and defeat all the villains.

34. Over Here, Slowpoke… (60G) — Learn all possible Awoken Skills for each race from the large time rifts.

36. The Bad Guys Always Wear the Coolest Clothes (15G) — Collect half of all equipment.

38. We Better Use the Hyperbolic Time Chamber… (15G) — Complete all Challenge Quests.

Tips: After completing the Time Vault chapter “Warrior from the Demon World” and earning the “Defiance in the Face of Despair!!” achievement for watching the ending sequence (which also unlocks the “Future Super Saiyan” Transformation) you may notice that the Story completion (in player stats) is not at 100%. That’s because there’s actually another secret mission called “Unknown History”.
To get access to “Unknown History” you must do a series of tedious questlines in the 5 Time Rifts (those big flying things over Conton City).

You must complete all quests in all 5 Time Rifts to earn 5 Distorted Time Eggs. Give the Eggs to the Supreme Kai near the Time Vault and then speak to Trunks.

Here are all 5 Quest Lines in detail. If you can’t progress in a questline it’s because your power level is too low or you need to wait between fights and do something else (recommended level is 75).

• Egg #1 Hercule’s House:
Do all 6 Sayamen Quests in Hercule’s House. When you enter the house area turn right and you can find them in the courtyard. If they aren’t there you must talk to them in the Resort District/Kame House first. You can ignore Hercule’s quests, only the Saiyamen matter.

• Egg #2 Capsule Corporation:
Do all 4 Vegeta Fights. He is standing in the left side of the area. If he doesn’t offer you a fight your level is too low and you must level up.

• Egg #3 Guru’s House:
Defend Guru’s House 10 times (do 10 of Nail’s quest in the House area). After accepting the first quest in this area you will sometimes see a notification in the top right corner of the screen that the house is under attack. When this happens Nail will offer you a new quest here. In those quests you must collect some dragon balls. There are 6 parts of the quest. After doing all 6 they reset to part 1. But you must keep doing these quests until a total of 10 have been completed. Then you can speak to Guru and he powers up your Shenron Wishes.

• Egg #5 Frieza’s Spaceship:
Do all 17 Quests in Frieza’s Spaceship. Some of the quests won’t show up right away and you must go away. Let some time go by and do some other fights (e.g. parallel quests). After a few other fights you should see a notification in the top right corner that a new mission is available in the spaceship. You may also need a certain power level for this, so be sure you have leveled up far enough.

Here’s the true final boss fight walkthrough. In it you will get to fight as Bardock vs. Mira. Afterwards Trunks visits Gohan together they fight Android 17 and Android 18 to alter history for a safer future.

Please comment if you have any Dragon Ball Xenoverse 2 achievement unlock tips of your own. Kudos will be given. – Thanks for visiting!