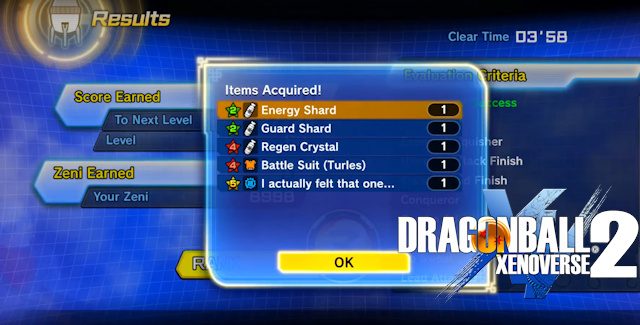 This Dragon Ball Xenoverse 2 money cheat for easy Zeni will show you how to collect quick cash by taking advantage of a rare item farming trick in the PC, PS4 & Xbox One fighting game.

As always with cheats involving in-game currency, use at your own discretion.

Here’s an easy way to get a lot of money very fast in Dragon Ball Xenoverse 2. Using this money cheat you’ll be able to get unlimited cash, as explained below…

In addition to Zeni, there are now TP Medals (Time Patrol Medals) as a new currency for Xenoverse 2.

Money Cheat Location: How to get an unlimited Zeni? It can be done by gathering lots of rare gear items. In turn, the Zeni you get from selling them at Item Shops can be used to buy things like skills, items, and clothes.

You only get awarded the “Battle Suit (Turles)” gear at completion of Parallel Quest 12 if you beat the enemies in this order: all Saibamen, Dodoria, Zarbon, Great Ape Vegeta & finally fight Turles in the underground lake; This is required to get the Ultimate Finish that awards you with Turles’ battle gear.

The higher the Parallel Quest number, the more money you can make. So if you’re a higher level character (you should reach Level 50 after completing the story Campaign), then “Parallel Quest 4: Prepare for the Attack of Saiyans” is recommended for farming money as well, as you’ll net about 40,000+ Zeni from items like the Hercule Badge (worth 8,000 Zeni) upon each completion. Finish each Parallel Quest at a high ranking to make even more money as a completion reward.

• Step 2: After you’re done playing Parallel Quests for one or more hours, go visit an Item Shop in the recreation plaza to check your winnings. At Items Shops with the robot cashier/shopkeeper, you’ll be able to exchange won/found items for Zeni. So go there and talk to the shopkeeper to Sell items for loads of cash!

The rarer the gear the more Zeni it’ll be worth. You can also sell all the other items you got that you don’t need or think you’ll never use. — So for example: After having played the in Step 1 mentioned Parallel Quest 12 for 1-2 hours, your sold items will earn you around 1 MILLION ZENI! 😀

Thanks for visiting! And feel free to leave a comment if you have any cheats and tips of your own and we’ll add it to this guide and give you credit. 🙂