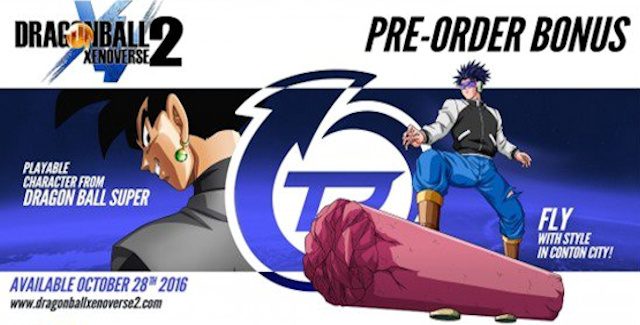 Here we will show you how to unlock all Dragon Ball Xenoverse 2 codes with a cheats list that’s valid for the PC, PS4 & Xbox One versions.

How To Get Black Goku & More Secret Characters

Pre-order Dragon Ball Xenoverse 2 on PS4, Xbox One or PC before the release date and you’ll receive a promotional pre-order bonus, or if you’re lucky you may find it in day one / launch editions of the game, which includes a download code to access the playable character “Black Goku” from Dragon Ball Super and the Tao Pai Pai Stick to fly over Conton City in style.

It is expected that later in 2016 “Black Goku” will be made available to everyone as paid DLC.

To get the remaining secret characters, please check out our “How To Unlock All Dragon Ball Xenoverse 2 Characters” page.

In Conton City talk to Time Patroller NPC’s like the blue-dressed woman Sanud, who will challenge you to a fight. After beating them, they admit you are truly the greatest and give you a Dragon Ball!

Alternately, here’s the most efficient Dragon Ball farming method in our “Dragon Ball Xenoverse 2: How To Get Dragon Balls & Summon Shenron” guide.

How To Play 2-Player Offline Mode with All Stages

How to play offline / local multiplayer:

• First, go to the Time Machine Station. – Use the Transfer Shop Clerk robot to travel there fast.

• Second, go to the “Battle Information” Station. In particular, the one toward the left side labelled “Offline Battles”.

• Third, select “Local Battle” and then choose the characters you want with both controllers.

Note: Since there are only 6 stages available in this Offline Mode, keep reading below the video for a trick to unlock all 28 stages for play!

How to play together on every of the 28 stages (not just the 6 mentioned above) with the timer turned off:

• Step 1: Go to the Training Mode in Conton City.

• Step 2: Pick your characters and any stage you want .

• Step 3: Once the game loads up you go to Training settings.

• Step 4: Change all settings to NORMAL.

• Step 6: Connect the second controller, then fight! – Have fun playing with your friends on every stage with no timer!

Note: These settings can also be used for player 1 VS. computer.

How To Get Capsule Corp Gi Clothes & More Hidden Outfits

How to unlock Capsule Corp Gi Clothes for your Custom Character:

Go to the Transfer Shop Clerk to teleport yourself to his location at the Capsule Corporation. Vegeta’s on the grey brick sparring field to your left, talk to him and complete “Sparring With Vegeta (Intermediate)”.

To get the remaining hidden outfits, outside of completing Parallel Quests, please check out our “How To Unlock All Dragon Ball Xenoverse 2 Outfits & Items” page for a farming method.

How To Transfer Save Data from XV1 to XV2

If you’re transferring Dragon Ball Xenoverse 1 data from PS3 or Xbox 360, the first step is to update Dragon Ball Xenoverse 1 to the latest version 1.08.02. You should get prompted to update at game startup if you’re connected online.
After updating, you can check it’s the correct version by looking at the startup screen’s bottom right corner where it will say: “ver. 1.08.02”.

Once you’ve started Dragon Ball Xenoverse 1 after the update, there will be a new Option in the Main Menu called “Upload Save Data”. Select that option and go through the message prompts to upload your save data.

To transfer Xenoverse 1 data that is already on your PS4 or Xbox One:
– Select “Yes” to the question “Do you want to carry over save data from the previous game that is stored onyour PlayStation 4 / Xbox One system?”
– Select “Yes” to the question “Once you have carried over your save data, you will be unable to do so again unless you delete your new save data. Are you sure you want to proceed?”

Bonuses: Carrying over your data will allow you to acquire certain costumes and skills and to receive rewards such as Zeni money and TP Medals (a new in-game currency in DBX2) based on your play data. This happens after progressing the Time Patrol Quests up to a certain episode. (You can still change before transferring by checking the costume and skills of the Time Patroller you want to transfer.)
– The following costume parts and skills are transferable from one Dragon Ball Xenoverse 1 Time Patroller of yours: Upper Body, Lower Body, Hands, Feet, four Special Attacks, two Ultimate Attacks, and one Evasive Skill.
– Your Time Patroller’s appearance, name, voice, and certain skills cannot be carried over, and some costumes and skills may look behave differently in Dragon Ball Xenoverse 2.
– The skills that cannot be carried over are: Super Saiyan, Super Saiyan 2, Super Vegeta, Super Vegeta 2, Kaioken, X2 Kaioken, X20 Kaioken, Potential Awoken, Riot Javelin, Rebellion Spear, Tyrant Lancer, Prelude to Destruction, Strike of Revelation, and Symphonic Destruction. These skills will instead be exchanged for Zeni and/or TP Medals.
– You can upload the original game’s save data as many times as you like, but you can only download it if no Dragon Ball Xenoverse 2 save data is present. If you want to transfer data again after you create new save data in Dragon Ball Xenoblade 2 (for example, you want to transfer a different Time Patroller’s data), you must erase your Xenoverse 2 save data and start again from scratch.
Note: Xbox 360 saves transfer only to Xbox One. And PS3 saves transfer only to PS4.

This video shows a couple of tips and tricks for the game’s basics. Supreme Kai of Time’s Tutorial in Dragon Ball Xenoverse 2 called “The Art of Battle!” explains how to Burst Dash, Z Vanish and more.

Next, you get an Expert Missions Tutorial that dives into how to counter Brainwash Attacks and Gigantic Ki Blasts! Expert Missions challenge you and other Time Patrollers against powerful foes, so be prepared! This tutorial shows how to fight the Giant Ape.

Do you know of any Dragon Ball Xenoverse 2 cheats or unlockables?
Let us know in the comments, you’ll get credit for finding out. – Thanks for visiting!