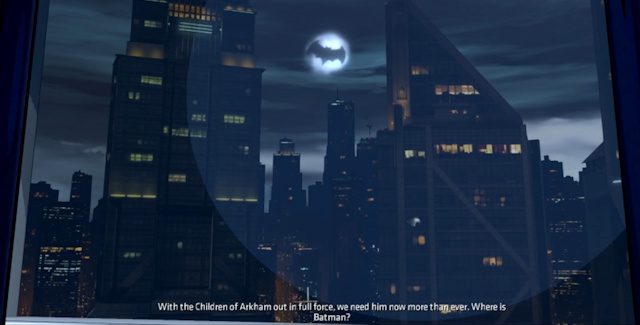 What is the Batman: The Telltale Series Episode 4 release date? Telltale Games has promised that on average with their episodic games you can expect a new downloadable episode every 5 to 8 weeks. As such, it’s been confirmed by Telltale that Episode 4 (titled “Guardian of Gotham”) is arriving on November 22nd, 2016. That date is worldwide on PC, Mac, Xbox One, Xbox 360, PS4, PS3 & Mobile devices!

Episode 4 Synopsis: Bruce and Batman must forge alliances and fight old rivals to protect the innocent and keep Gotham from descending into chaos.

The Episode 4 chapter names hint at what events to expect:
• Chapter 1: Price of Admission
• Chapter 2: A Serious House
• Chapter 3: Home Sweet Home
• Chapter 4: Back to Business
• Chapter 5: Another Night at the Office
• Chapter 6: The Good, the Bat, and the Ugly

October Video Updates: What’s in store for the latest episode of BATMAN: Unmasked? Host Greg Miller sits down with Batman – The Telltale Series writer James Windeler, director Jon Stauder and Harvey Dent himself Travis Willingham. They delve deep into the events of Episode Two – ‘Children of Arkham’, discuss the rewarding challenges in bringing the complex character of Dent to life, as well as theories on where the characters and story could go as the series progresses.

Telltale’s games are created by a team of designers, writers, animators, artists, and more, to create the game you play. In this “Directing Episode One” behind-the-scenes interview, we talk with Kent Mudle, Director of Batman Episode One.

November 17 Update: Today Telltale announce that the next episode of ‘BATMAN – The Telltale Series’ will be arriving next week! Starting November 22nd, Episode 4: ‘Guardian of Gotham’ will be available digitally worldwide on PC, PS4, Xbox One, Xbox 360 and PlayStation 3. It will also be available on iOS devices via the App Store and Android devices via Google Play.

Along with that, the developer has shared a sneak peek at the upcoming entry of your interactive Batman tale. Check out the trailer below for a glimpse at what’s in store.

In this penultimate chapter, things have gone from bad to worse for The Dark Knight due to the shocking events of Episode 3: ‘New World Order’. Penguin has taken control of Wayne Enterprises, and the Elizabeth Arkham Asylum for the Criminally Insane has a new guest – you – Bruce Wayne. With the Batman removed from the streets of Gotham City, Harvey Dent’s forces and the Children of Arkham are at war, with innocent citizens caught in the crossfire. To escape the ‘comforts’ of your padded cell, you must choose allies to aid in your escape, even if they aren’t the sort to put a smile on your face. How far are you willing to go for justice? For vengeance?

It’s another tense, action-packed episode featuring a first appearance by a grinning future adversary….. We can’t wait for you to dive back in and fight to save Gotham City with your choices!

Special note: Players will leave this episode in very different places depending on where they choose to go in the third act, and this will greatly affect their story rolling into the season finale as well.

Future Updates: This section is reserved for future updates like Episode 4 screenshots and the Episode 4 launch trailer.