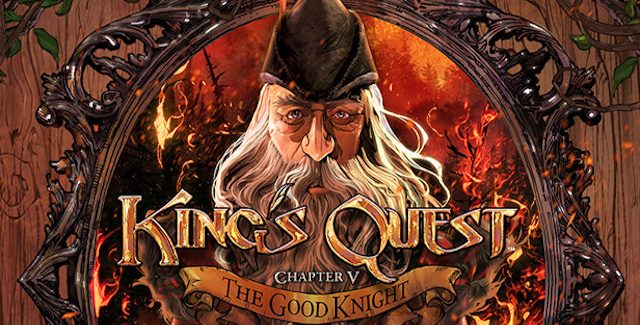 The King’s Quest 2015: Chapter 5 walkthrough will guide you through the beginning to ending moments of gameplay with puzzle solutions and strategy tips for this episodic adventure game on the PC, PS3, PS4, Xbox 360 & Xbox One.

Let’s start the “King’s Quest 2015 – Chapter 5: The Good Knight” walkthrough with an intro video followed by a full perfect playthrough!

Developed by The Odd Gentlemen, King’s Quest rekindles the classic feelings of exploration, wit and wonder that have always defined this family-friendly series since its introduction over 30 years ago. – The final entry in a planned five-chapter arc, King’s Quest continues the unforgettable journey to come with original places, puzzles and personalities to discover.

In this final chapter, no additional plays are required, everything can be unlocked in a single run.

In UKGN’s guide you can find out how to get 100% of the unlockable Achievements or Trophies, listed one at a time here-under.

Timeline in minutes for when the Achievements / Trophies get unlocked::

• [08:48] Treasure Trolled (Secret)
Create the Bridge Troll memorial then look at both statues.

• [26:16] Raisin the Dead (Secret)
Go left below the pumpkin patch and ignore the warnings that there’s nothing to see.

In his latest adventure, King Graham tells of his final battle with the Goblin Sorcerer Manannan and his final adventure.

All Puzzles Solved: Covered are…
– A patch of fire impeded the path forward. Here’s how to put out the fire on the Bridge Puzzle.

All Puzzles Solved: Covered are…
– Music Box Song Unlock to solve the Locked Door Puzzle. Music is the Key to Unlocking this Memory.
– Ice Labyrinth Puzzle Room solved. Find a way to get everyone on the switches.

All Puzzles Solved: Covered are…
– Graham must prove to Mordack that his mind is still strong and quick by completing the Trail of Speed through classic King’s Quest gameplay in 8-bit retro graphics. Bring back Germite Crystal and Chromium Lock.

All Puzzles Solved: Covered are…
– Get all all 6 puzzle solutions in the Toxic Duel of Wits.
– On the Floating Island, Mordack designed a Series of Trails to test Graham and Manannan in the season finale of King’s Quest – Chapter 5: The Good Knight ending.

The End? I imagine there will be a season 2 with the adventures of Queen Gwendolyn.

To Be Continued: The season 1 Epilogue will arrive later on, hopefully still in 2016. – Join the discussion of what will happen next on our “King’s Quest 2015: Epilogue Release Date” page.

Thanks to Sierra, UKGN & GamerrZombie for the tips & walkthrough videos.