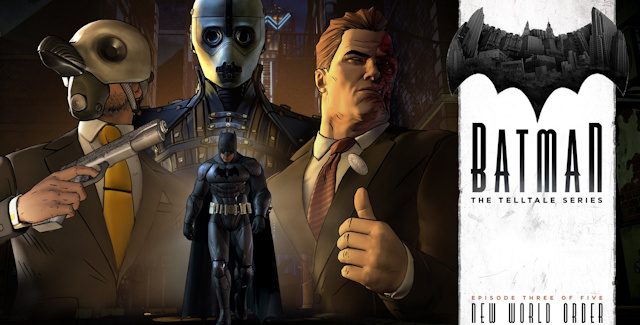 The Batman: The Telltale Series Episode 3 walkthrough for “Episode 3: New World Order” will guide you through the beginning to ending moments of gameplay with strategy tips for this graphic adventure game on the PC, Mac, PS4, Xbox One, PS3, Xbox 360 & Mobile (iOS and Android-based devices).

Let’s start the Batman: The Telltale Series Episode 3 walkthrough with an introduction video!

Please note that viewers must be at least age 18 to watch. Fair warning given because the game includes Extreme Violence, Blood, Sexual Themes, Language, use of Drugs.

Welcome to the Batman: The Telltale Series Episode 3 walkthrough!

Doug is your voice-over commentator showing you around the game’s chapters. – He’ll mostly make all the nice-guy choices.

Below you’ll find both playthroughs based on the different choices made at the end of Episode 2, where you could choose to find out what happens if instead of “Save Harvey” (non-fighter who needs help) you chose to “Save Catwoman” (she can handle herself).

Synopsis: It’s another action-packed episode as we hit the midpoint of the season… Penguin’s brutal attack broadcast on live TV has left Gotham City reeling. As Bruce and Batman, you’ll dig deeper into the web of intrigue surrounding the newly revealed Children of Arkham. Meanwhile, behind closed doors, the mysterious Selina Kyle reveals more of herself to Bruce. And in the aftermath of the attack, Bruce’s friend and Gotham’s new mayor, Harvey Dent, is a deeply changed man. Who can be trusted when the future of Bruce Wayne – and the Batman – could be determined by the flip of a coin?

The Episode 3 chapter names are:

Full “Save Harvey” walkthrough for Episode 3:

Full “Save Catwoman” walkthrough for Episode 3:

How to trigger the Catwoman love scene? Make these dialog choices in Catwoman’s apartment:

• Did you back up Montoya or Harvey Dent?
• Did you punch Oswald Cobblepott?
• Did you give Lucious a job?
• Did you romance Catwoman?
• Did you attack Harvey?

Next Episode: Please join our “Batman: The Telltale Series Episode 4 Release Date” discussion about what will happen in Episode 4: Guardian of Gotham.

Thanks to Telltale Games, Doug, Gaming Extras & AFguidesHD for the walkthrough videos.