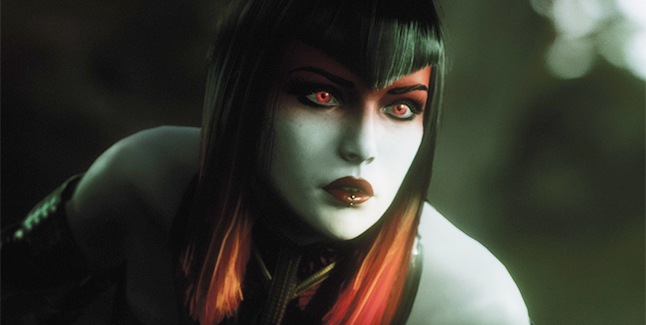 Epic Games Blog: We’d like to introduce you to the latest Hero. We call this burst casting vampire… Countess. You’ll be able to play Countess starting Tuesday, October 25. Get your first look at Countess below.

Countess is a burst caster whose greatest strengths are misdirection and unpredictability. Utilizing her abilities, Countess can quickly single out and assassinate a key target and vanish into the darkness.

• Blade Siphon – Countess quickly spins her blades around her, causing damage in a circle around her. Passive: Countess regains a percent of her max health every time she kills an enemy, with bonus health for a Hero kill.

• Shadow Slip – Countess targets a nearby enemy and blinks to it, dealing damage and applying a slow. If the target is a minion, it is executed. Reactivate to return to the original position.

• Dark Tide – Countess sends out a roiling cloud of darkness in front of her, dealing damage to all enemies in the area of effect.

• Feast – Countess jumps to a nearby enemy Hero, forcing them to look at her and stunning them before dealing a massive burst of damage. Countess is locked down for the duration of the attack.

As always, all Heroes in Paragon are free, so jump in as Countess on Tuesday. If you can’t wait to get your Paragon fix, you don’t have to – Paragon is in Free Open Beta, so you can download and play today.