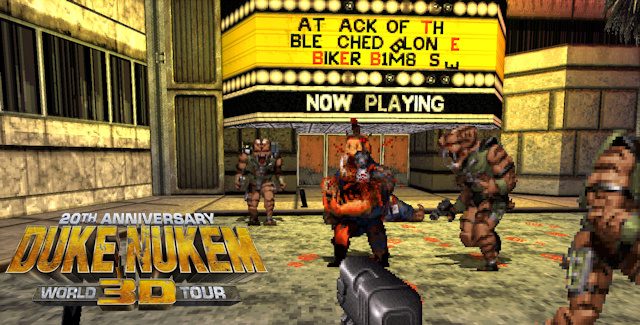 The Duke Nukem 3D: 20th Anniversary Edition World Tour achievements guide lists every achievement for this Xbox One & PC first-person shooter game and tells you how to get and unlock them all.

In the Duke Nukem 3D: 20th Anniversary Edition World Tour achievement guide we’ll show there are 27 Achievements (3 Secret Achievements) with a total of 1,000 Gamerscore points to earn in the Xbox One and PC versions.

Location: Select Level 2 of L.A Meltdown, after getting both access cards early on, you will eventually end up in a room with exotic dancer. All you have to do is just walk up to one of them and interact with them to get the achievement.

Easy Method: Using a trick you only have to find 1 secret area, and rewind using the “Playback Feature” to before you enter it, and enter the same secret area 70 times.

Start Episode 2: Lunar Apocalypse at the Spaceport level (without using cheats), use the teleporter to get the RPG from your shuttle and go back to the space station. Go forward and turn right (after the force field), kill the shitter and “activate” the second row of screens from the window, the message “A Secret Place!” should pop up. Then use the “Playback Feature”, this allows you to replay the level from any point, so you can rewind a minute to right before you entered the secret room. Repeat this process 70 times.

Location: In Episode 1: L.A. Meltdown, Chapter: Hollywood Holocaust. This video guide shows the path to complete this level in half the required time by using the movie theater Exit door, going outside and right away flying up to the red-lighted walkway level exit with the jetpack.

Location: In Episode 1: L.A. Meltdown, Chapter: Hollywood Holocaust. Shows all enemies in the level, including all secret areas.

Note: Luckily this works because the developers made it so that turning on any cheat code does not disable the unlocking trophies.

Location: Can be found in Episode 5: Alien World Order, Chapter: Mirage Barrage, at the end of the level. The secret exit symbol (the secret level entrance) is located on the opposite side of the normal Nukebutton exit across the room, behind a masked wall. You have to blow up the reactors first in order to access the secret Nukebutton exit.

18. That’s What She Said (15G) — Listen to Developer Commentary (Use at least one trigger).

Location: Can be done in Episode 4: The Birth, Chapter: The Queen. Turn on the “Cheat Menu” with the code mentioned in the “Cheating!” section, then enable “All Weapons” to get the Rocket Launcher and “God Mode” so you cannot die. Go to the pile of eggs on the right and make sure they all hatch and surround you, then fire the rocket on the ground to kill them all.

Location: Can be done in Episode 1: L.A. Meltdown, Chapter: Death Row. Turn on the “Cheat Menu” with the code mentioned in the “Cheating!” section above, then enable the “God Mode” & “No Clip: Off” to turn on the jetpack to make your way to interact with the altar to reveal the secret passageway behind the cross inside the church.

Location: Can be done in Episode 2: Lunar Apocalypse, Chapter: Lunar Reactor. Turn on the “Cheat Menu” with the code mentioned in the “Cheating!” section above, then enable the “God Mode”, “No Clip” & “Give All” to turn on the jetpack to quickly make your way to the crawl space in the vents.

Location: Can be done in Episode 5: Alien World Order, Chapter: Mirage Barrage. Turn on the “Cheat Menu” with the code mentioned in the “Give All” section, then enable “All Weapons” to get the jetpack to fly to Sam who can be found next to the pyramid to the left.

Please comment if you have any Duke Nukem 3D: 20th Anniversary Edition World Tour achievement unlock tips of your own. Kudos will be given. – Thanks for visiting!