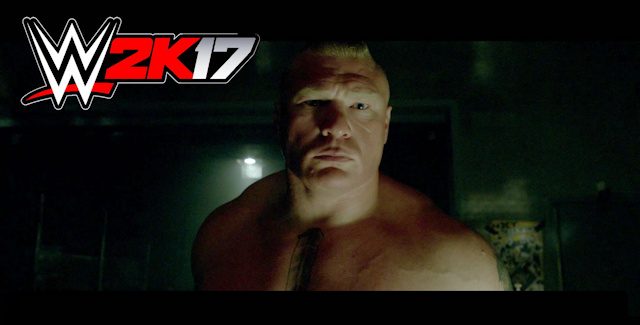 The WWE 2K17 trophies guide lists every trophy for this PS3 & PS4 pro wrestling fighting game and tells you how to get and unlock them all.

3. Road to WrestleMania (Bronze) — WWE Universe – Win the Royal Rumble and get the WWE World HW Championship at WrestleMania.

4. Attitude Adjustment (Bronze) — WWE Universe – Max any personality trait of a Superstar by playing in a match.

5. Face of the WWE (Bronze) — WWE Universe – Create Major Shows for Mon-Sat and assign the same Superstar to each show.

9. Actions speak louder than words (Bronze) — WWE Universe – Have the dominant personality trait of a Superstar change via gameplay.

10. Future of the WWE (Bronze) — WWE Universe – Cash in Money in the Bank at WrestleMania and win the Championship.

12. Gentleman in the ring (Bronze) — Push opponent into the ropes during chain wrestling to perform a clean break. (Single play)

13. Now that’s hardcore! (Bronze) — Hit an opponent with a foreign object or put them through a table. (Single play)

14. Oh! My! (Bronze) — Put your opponent through the announce table via OMG! moment. (Single play/Exhibition)

Tip: Easy to do move, get a Finisher and go by the table outside and press R1 + Triangle.

15. Over the ropes you go! (Bronze) — Eliminate 12 opponents with the same Superstar in a single Royal Rumble match. (Single play)

19. Tap! Tap! Tap! (Bronze) — Make an opponent tap out with a submission that is not a Finisher or Signature move. (Single Play)

22. This is my yard (Bronze) — Create a show that uses a custom Arena and an imported Logo for its show logo.

23. Fashion leader (Bronze) — Use a custom Championship and win a match. (Single play)

Note: In order to do this successfully, you’ll have to win off the sig, because it doesn’t count when done with the F5 after.

30. We have a new Champion! (Bronze) — MyCAREER – Win the WWE World Heavyweight Championship.

32. Welcome to the main roster (Bronze) — MyCAREER – Complete your first match in RAW or SmackDown.

37. Birth of a US Champion (Bronze) — MyCAREER – Earn the United States Championship.

39. I am a Wrestling God (Silver) — MyCAREER – Purchase all abilities that can be purchased.

40. I am the best! (Silver) — MyCAREER – Purchase all skills that can be purchased.

41. Competent manager (Bronze) — MyCAREER – Purchase all managers that can be purchased.

Tip: Get a Finisher, then go outside press R1 + L1 and it should get the big ladder out. Or if that doesn’t happen, press R2 + L2 with R1 + L1 then swing them into ladder and press R1 + Triangle and it will unlock.

49. Keeping it together (Bronze) — Create a new Group logo.

51. Drop the Mic (Bronze) — WWE Universe/MyCAREER- Defeat a rival in a Promo.

52. Woman of the year (Bronze) — WWE Universe – Win or defend the WWE Women’s Championship at WrestleMania.

Note: Play with the most recent versions of both Undertaker and Sting.

Glitched Trophy: This Trophy may be glitched at launch. Like it was in last year’s game, so a post-launch patch beyond version 1.01 should fix the issue.

Please comment if you have any WWE 2K17 trophy unlock tips of your own. Kudos will be given. – Thanks for visiting!