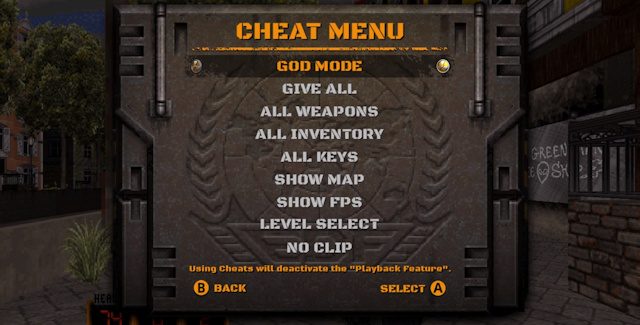 Here we will show you how to unlock all Duke Nukem 3D: 20th Anniversary Edition World Tour codes with a cheats list that’s valid for the Windows 10 PC, PS4 & Xbox One versions (where available).

How To Activate Cheat Codes

Unlock All Cheats with this Cheat Code: Entering the following cheat code in-game will activate the “Cheat Menu” where you can turn all cheats in the game on and off.

• PC: Type DUKE on your keyboard.

The unlocked cheats are: God Mode, Give All, All Weapons, All Inventory, All Keys, Show Map, Show FPS, Level Select, and No Clip.

Note: Using Cheats will deactivate the “Playback Feature”. Luckily enabling the Cheat Menu lets you keep earning Achievements or Trophies for this game, even while using these cheats in-game.

This video shows how to activate all cheats, skip to 3:59 minutes for the explanation.

How To Activate SHiFT Codes

Where To Enter Shift Codes?:

• Step #2: Start the game, and from the Main Menu go to additional content by selecting “SHiFT Codes”. Then link your SHiFT account to your Xbox Live account (for Xbox One users), PSN account (for PS4 users) or Steam account (for PC users). Just follow the on-screen redemption instructions. Once you redeem the code, SHiFT will display confirmation when the code is successfully redeemed.

• Step #3: Check back on this page once the first SHiFT Code(s) are revealed. These are usually posted to Twitter in the week-month after release by these official developer accounts: Randy Pitchford & Gearbox Software.

How Long Do Shift Codes Work?:

A) Shift Codes will expire after a set amount of time. Usually after one week (but it can also be after one day or never at all). We will indicate when it expires.

B) Shift Codes can also expire after a certain number of people have used them. Usually after 10,000 people (or more/less) used them.

Note: Shift Codes from the Battleborn & Borderlands series do NOT carry over to Duke Nukem 3D.

How To Activate Retro or New Graphics

Here’s how to switch between the old & new graphics: Press down on the Directional-Pad to activate Duke Nukem 3D’s 2.5D retro & new 3D graphics.

Keep pressing the same button/key to switch between these two graphic modes: 1) The original 1996 source code and 2) The “2.5D” engine re-mastered in True 3D.

Do you know of any Duke Nukem 3D: 20th Anniversary Edition World Tour cheats or unlockables?
Let us know in the comments, you’ll get credit for finding out. – Thanks for visiting!