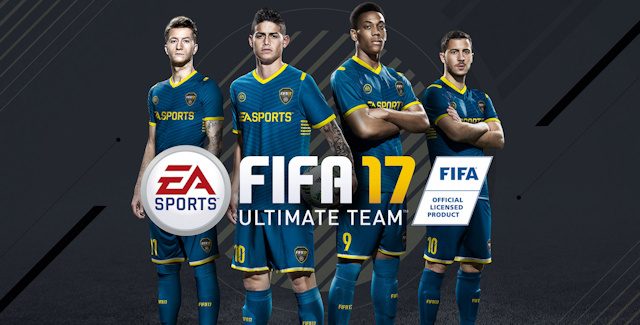 Ultimate Team is the most popular game mode in FIFA 17 with millions of games played daily! See all the new features coming to FIFA 17 Ultimate Team!

Tip: FUT Champions is the all-new way to compete in FIFA 17 for the PC, Xbox One and PlayStation 4 consoles. Each week, qualify for the Weekend League and compete for in-game rewards. Consistently showcase your skill and climb the Monthly Leaderboards to earn some of the biggest in-game rewards.

Create your own Ultimate Team, fine-tune it to perfect Team Chemistry, and try to reach the top of the FIFA Ultimate Team (FUT) leaderboards. Choose Players to build Squads with high Chemistry, buy or sell items on the 24/7 live Transfer Market, and play in a variety of both single-player and online game modes.

When you first start Ultimate Team, you’ll learn how to swap and link Players to improve Team Chemistry before playing a starter match. From there, you can start your own Squad and explore the Transfer Market, Pack Store, and your Club.

Chemistry is at the core of what makes your Ultimate Team successful. Having a team of star Players can help you shine on the pitch, but your Squad must also have the right Chemistry to allow you to maximize its performance. The higher your Chemistry, the better your team performs during matches—and that means a better chance at winning games.

Your team’s Chemistry Rating appears in the upper right corner when viewing your Active Squad. Placing players in their preferred positions can improve Chemistry. You should also encourage stronger Chemistry by matching Nationality, League, and Club Chemistry—green lines indicate strong links between Players.

Swap your players around on the Active Squad screen and add new ones from your Club or the Transfer Market to find the ideal balance for your team!

Every player in Ultimate Team has a Chemistry Style. This affects which attributes will be improved based on the Player’s Chemistry Rating. Arrows appear beside the attributes that a specific Chemistry Style affects, and as you start building up Chemistry, they will turn from white to green.

To get the most out of your Squad, you can apply new Styles to Players to upgrade different attributes and, in turn, the team’s overall tactics. The effects remain on a Player until a new Style is applied. You can find these Styles in Packs and on the Transfer Market.

Before players can excel out on the pitch, they need Contracts to play matches. When viewing your Active Squad, highlight a Player and access the Actions menu, then select APPLY CONSUMABLE to apply a Contract to a Player. Move the right stick to switch to the status view, which shows the amount of remaining Contracts for every player.

To give you a head start, the Players from your Starter Pack will come with special long-term Contracts (45 matches). All Players found in Packs start with seven Contracts, and each match they play reduces the number of Contracts by one. If a Player is in your subs or reserves but doesn’t head onto the pitch at all, he does not lose a Contract for that match.

Challenge your team and reap the rewards in Matches, Tournaments, and Seasons.

Tournament matches are always single-round knockout matches, and can be played online or as single-player games. Win matches to earn Coins, or take your team to the top and win a Tournament to gain Trophies, Coins, and sometimes even Packs.

Seasons consist of 10 games, playable Online or in Single Player mode. Try to make it through and win the Season or gain promotion! In this mode, the promotion, hold, and relegation system means that losing a match doesn’t eliminate your team from the season, giving you the opportunity to bounce back from defeats.

Friendly Seasons allows you to challenge your Friends in a five-match season format. Keep track of your record and other stats against every one of your Friends, and win seasons to earn the Current Title Holder position and the bragging rights that come with it.

The Transfer Market is the hub for purchasing, listing, and selling items. Here, you can find new Players to increase your Squad’s overall rating and Chemistry Rating. If you’re looking for a new Player, use the search filters such as Quality, Position, Chemistry Style, and Pricing to quickly find the ideal footballer to complement your Active Squad.

If you want to search for a specific Player to fill out your Squad, use the first option in Player Search to type in his first or last name. This lets you easily select the Player you want based on the search results that appear.

Concept Squads is a powerful new Squad Planning tool that lets you put together Squads using every Player available in FUT.

To use Concept Squads, select a Player or empty slot in the Active Squad screen, and then access the Actions menu to choose SWAP/ADD PLAYER. Use Concept Squads to plan out your next moves. Find replacements for a Player, test out the Chemistry of an entirely new midfield, or try a whole new Squad before investing in the Transfer Market.

How to add Concept Squad Players to your Squad:
– Select a slot in your active Squad
– Select the add or swap Player option
– After setting the filters you’d like, select the “Search Concept Players” option to search the full list of Players available in FUT.

Loan Players are Players that you can sign to your Squad for a limited number of matches, allowing you to try out some of the most highly sought after Players in the game. When you first create your club in FUT 17, you’ll be given the opportunity to sign one Loan Player for free. More Loan Players are available in the Football Club Catalogue.

Purchase Packs from the store to find new Players for your Squad. You’ll also sometimes earn Packs from winning Tournaments or as a special reward at the end of a Season.

Tip: Use the FIFA 17 Web App to receive free Ultimate Team player starter packs as a bonus! Check back daily for more freebies.

As you gain new players through the Transfer Market and from Packs you have purchased or won, you will have more than enough for one Squad. My Club contains all of the Players not in your current Squad, as well as your Consumables and other Items.

Check out the leaderboards to compare yourself to your friends or the top 100 FUT users across the globe as you build your Ultimate Team, play Tournaments and Seasons, and grow your Club.

PHY, which stands for “Physical”, is the new sixth base attribute in FIFA 17 that will be featured on FUT player items. It is a measure of key physical traits such as Strength, Stamina, and Jumping. PHY is important to FIFA 17 and FUT because it will help you determine a player’s ability to win physical battles across the pitch and keep their fitness throughout.

Although Heading was a great attribute to judge players by, PHY will have a more significant impact during a match. By paying attention to the players’ PHY attribute you’ll be better prepared to build your dream team in FUT 17 and beyond.

The FIFA 17 companion app is available on the Apple App Store for the following devices:

The game is available for select devices on the Google Play Store. For the best experience we recommend playing on one of the following devices:

Requires Android 4.1 and up.

How FIFA Ultimate Team is made fair, fun & secure:

To kick off the new Ultimate Team season, the Transfer Market will once again be available within both the Web and Mobile Companion apps beginning September 17. Returning and verified FUT 15 players will be able to get access to the web app and begin building their Ultimate Team club by opening free returning user packs and by trading early via the Transfer Market.

*Please note you’ll need to start on the web app before you can use the mobile app.

EASIER TO BUY AND SELL!

In FUT 17, Price Ranges will start much wider. This will make it easier to buy and sell players on the Transfer Market. Our aim this year is to keep Price Ranges as wide as possible throughout the season to offer a fair environment for trading and to protect the market against coin buying. The less coin farming and buying we see within FUT 17, the wider the Price Ranges will stay.

The chart below illustrates the average price of a sample top-tier player in FUT 15 and the change in Price Range parameters from FUT 15 to FUT 17 at launch. The wider ranges will enhance the trading experience on the Transfer Market.

To further prevent coin farmers and coin buyers from negatively impacting the FUT economy, we are splitting Transfer Market economies by console generation. This means coins, club items, and transfer market items will no longer be shared between Xbox 360 and Xbox One, and between PS3 and PS4.

When first accessing FUT 17 through the web apps, you’ll be asked to choose which console you would like to start your FUT club in. After choosing your console type, it will become the default for your account. From that point onwards, all your coins and items will stay within that account on the default console.

These tips will help you get closer to your FIFA 17 Ultimate Team!

FIFA 17 Ultimate Team Walkthrough continues on Page 2 with “When Should You Sell?”