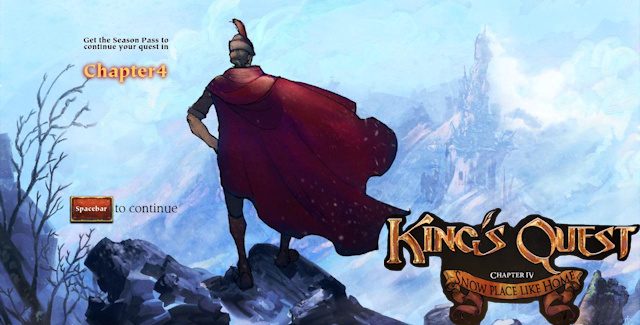 The King’s Quest 2015: Chapter 4 walkthrough will guide you through the beginning to ending moments of gameplay with puzzle solutions and strategy tips for this episodic adventure game on the PC, PS3, PS4, Xbox 360 & Xbox One.

In his latest adventure, King Graham recounts the time he had to rescue Prince Alexander from Queen Icebella’s Frozen Castle.

In XCV’s guide you can find out how to get 100% of the unlockable Achievements or Trophies, listed one at a time here-under.

Timeline in minutes for when the Achievements / Trophies get unlocked::

Story Synopsis: King’s Quest – Chapter 4: Snow Place Like Home is a romantic comedy adventure featuring a beloved character from the series’ classic beginnings: King Graham’s wife and Gwendolyn’s grandmother, Queen Valanice. Dedicated fans may think they know the legend of how Graham rescued his future bride from the wicked witch Hagatha’s tower but the truth behind the fairy-tale is much more complicated!

In his latest adventure, King Graham recounts the time he had to rescue Prince Alexander from Queen Icebella’s Frozen Castle.

All Puzzles Solved: Covered are…
– Putting the crying baby twins Alexander & Rosella to sleep using: Cloth Diaper, Baby Formula, Baby Bottle, and for the last step by warming up the Ice Cold Baby Bottle.
– Encounter with Manny AKA Manannan who uses his magic to kidnap Alexander AKA Gwydion from the castle to make him the future King of Daventry. After that you’ll need to search the woods surrounding the castle, follow the path between the trees to the right and look for the second hole in the ground to find a clue on top of the bail of hay in the secret cave bedroom. 18 Years of searching for your son later…
– [19:20] To win the Staring Contest against Rosella keep the green cursor focussed around her eyes for 1 minute and 10 seconds.
– After 18 years Alexander magically returns home to the castle.

All Puzzles Solved: Covered are…
– [10:00] Graham loads Luggage Suitcases into the Carriage Puzzle, make it fit with your years of Tetris puzzling experience!

All Puzzles Solved: Covered are…
– Sphinx Ice Palace Room Puzzles solved. Graham and Alexander must work together to make their way through the Ice Palace and make it to the Center of the Labyrinth to reunite his family.

All Puzzles Solved: Covered are…
– Sphinx Ice Palace final rooms.
– Now separated from his son Alexander, Graham must solve more Labyrinth Puzzles on his own.

All Puzzles Solved: Covered are…
– The Sphinx Riddle Room:

• Riddle: What am I? I have a head but no arms to flail. I have no legs, yet I have a tail.
Solution: Grab the Coin on the front-left table and put it on the altar in the back room behind the Sphinx.

• Riddle: What am I? Every morning a noggin I shed, and every evening I regain my head.
Solution: Go to the back-left table and pick up the Pillow, then place it on the altar in the back room behind the Sphinx.

• Final Riddle: What am I? I am higher than the shining stars and greater than any land or sea. What’s the one thing that’s worth breaking the bonds of your family.
Solution: The answer is to pick up nothing and go through the final door to exit the Riddle Room. HOWEVER, BEFORE you leave do NOT forget to pick up the King’s Crown from the back-left table!