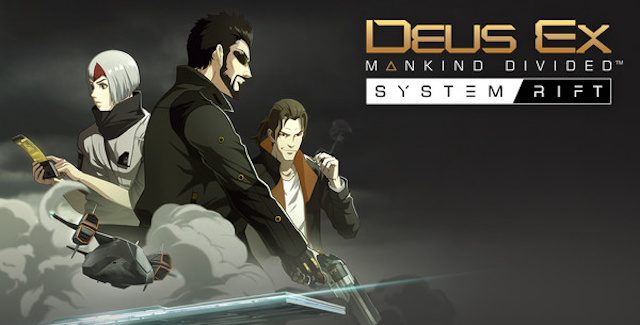 The Deus Ex: Mankind Divided – System Rift walkthrough will guide you through the beginning to ending moments of gameplay with strategy tips for this action-RPG FPS stealth game DLC #1 on the PC, PS4 & Xbox One.

Please note that viewers must be at least 18 to watch, so no harm comes to those with innocent eyes. This game includes Violence & Bad Language.

Re-unite with Frank Pritchard, Adam’s friend and former colleague at Sarif Industries, and assist him in hunting down information on the mysterious Santeau Group. Desperate to get more information, Pritchard targets one of the most secure data banks ever created – the Palisade Blade. In agreeing to help, Adam may also be able to uncover hints as to who the Illuminati really are.

Wiz will be your voice-over commentator showing you around the game’s new areas.

How To Start System Rift: “System Rift” is not integrated into the main game’s storyline, instead it’s part of the “Jensen Stories” episodes.

Story Note: “System Rift” is a standalone story that could spoil the main Deus Ex: Mankind Divided storyline, so it’s recommended finish that first before playing this story DLC.

Next, AJ will be showing you the perfect stealth tactics to finish this DLC.

And remember, it’s no use running away from Adam Jensen. He’ll freeze you in place and stun gun your *ss! 😆

Thanks to Square Enix, TheArcaneWiz & AJ Nguyen for the walkthrough videos.