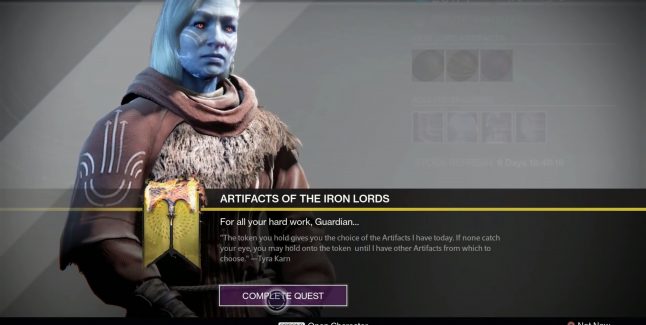 Finding all 8 Iron Lord Artifact locations and picking them up will help unlock the following Achievement / Trophy:
* “Student of History” (40 Gamerscore / Silver Trophy) — Activate all Iron Lord Artifacts [at some point].

The Timeline for all these in-game Iron Lord Artifacts locations is listed below.

How To Get Iron Lord Artifacts:

First you need to get an Iron Lord’s Legacy token item. You get it by finishing Rise of Iron’s main Story Missions, at which point you receive the “Artifacts of the Iron Lords” Quest from Tyra Karn at Felwinter Peak (in the Iron Temple), and start with the “Champion of the Light”, where you must complete its objective that sees you perform noble deeds in the Plaguelands (0/1000).

“The Iron Lords were happy to share their Artifacts with others. They asked only that supplicants first prove their good intentions by performing noble deeds. It would be a shame to break that tradition, I think.” -Tyra Karn

Noble deeds can be A) Quests and Bounties specific to a certain area in the “Plaguelands” that require you to complete certain activities like killing enemies, or B) Completing “Plaguelands” Patrol Missions. – This will result in enough noble deeds done to unlock it.

Secondly, turn in the Bounty or Quest to get the once-a-week awarded Iron Lord’s Legacy token item, which in turn you can exchange for an Iron Lord Artifact of your choice with Tyra Karn, who is the so-called Cryptarch of the Iron Temple social space.

How To Equip The Iron Lord Artifact:

But you’re not quite done yet after obtaining a new Iron Lord Artifact. Right after you get it — but before you can equip it on your character — you first have to perform Attunement.

You’ll have to accept Tyra Karn’s Quest to Attune your new Artifact, the on-screen description will detail the last step to enable wearing it: “Attune the Artifact to the Iron Lords’ ancient data troves by bringing it to the statues in the Iron Temple.” Basically, you need to go to the Iron Temple’s statue that the Artifact belonged to and present it in front of it, which will make it ready for you to use!

Note: Iron Lord Artifacts require a Level 40 character to equip, you can equip only one at a time. And they are set at 350 Light Level.

Where to find all Iron Lord Artifacts in Destiny: Rise of Iron? The in-game collectibles locations for the Iron Lord Artifacts, along with the noble deeds to do leading up to getting them from Tyra Karn, are described in this detailed video guide with handy voice-over tips.

Watch the full Artifacts of the Iron Lords Walkthrough.

Here are the descriptions of the 8 Class-agnostic Artifacts of The Iron Lords. Yes, that’s right, these Iron Lord Artifacts can be used by any class in the game. 😀

Intro: Only the eight Iron Lords who fell when sealing away SIVA have their own named artifacts, but canny players know that two more heroes once stood at their side. Saladin is the most familiar; he has hosted the Iron Banner to hone the Light of newer Guardians and prepare them for the threat of SIVA’s reemergence. But the sniper named Efrideet also may have survived, as she has no statue in the Mausoleum. Bungie won’t be waiting long before exploring the mystery of her disappearance. But first, let’s dive into the eight new Iron Lord Artifacts.

“Our lives are no longer our own. We have sworn them in service to the Traveler, and to humanity.” -Lord Radegast

Description: Described as the first among equals, Radegast the Titan was the King Arthur of the group, and strode into battle with a mighty sword in hand. His artifact adds a new ability for sword heavy weapons, letting you reflect energy-based projectiles, including everything from an ogre’s blasts to a Crucible opponents rocket.

Buffs / Bonuses: Can reflect energy-based projectiles with a sword, including Crucible Rockets.

“We hunt best in a pack.” -Lady Perun

Description: The field commander of the Iron Lords was a consummate strategist, and her situational awareness went beyond even fellow Hunters. If you bear her artifact into battle then enemy Guardians with full supers are highlighted yellow, and all enemies with low health are highlighted red for easy targeting.

“If I am to die, let it be in battle, with weapons in my hands and laughter in my heart.” -Lady Jolder

Description: A particularly close companion of Saladin, Jolder was a mighty Titan Champion who ran bravely into battle without a thought for her own safety. Her artifact bears an ability that many players have longed for since the games launch- the ability to completely eliminate sprint cooldown, allowing your guardian to ceaselessly charge ahead.

“Come, is there no one who can stand against the Iron Wall?” -Lord Silimar

Description: Silimar was proud, wrathful, and brilliant, and the architect of the Iron Temple that sits atop Felwinter Peak. He was a defense-oriented Titan, always looking for a way to offer better protection. As such, his artifact provides a unique ward-the ability to dramatically reduce any damage inflicted through damage-over-time (DoT) effects. It should be a welcome deterrence, especially since the infamous Thorn hand cannon is returning in Year Three.

“I accept the consequences.” -Lord Felwinter

Description: The great enigma of the Iron Lords, Felwinter was an Iron Lord with good intentions, but sometimes questionable and unusual ways of interacting with the Light. The Warlock discovered the mountaintop retreat that would become the Iron Lords home. His artifact offers the most dramatic gameplay modifier- lose your super, but gain an extra grenade and melee charge, a boost to all your stats, and orbs recharge your grenade and melee abilities.

“So long as we actually manage to do some good, you can call me Iron anything you want.” -Lord Gheleon

Description: The Hunter named Gheleon may have been a sullen pessimist, but few doubted his assessments of the situation on the ground- no matter how dire. Guardians that wield his artifact gain detailed radar at all times, and radar persists when aiming primary weapons.

“The astral orb, slung low across the sky — Beneath it raised we lords our banner high.” -Lady Skorri

Description: If Radegast echoes the legends of Arthur, then Skorri is Merlin. This legendary battle bard and Warlock inspired her allies with songs and wisdom. Guardians who follow in her footsteps use her artifact to glow with an inspiring light that speeds up super recharge for all nearby allies.

Buffs / Bonuses: Produces area of effect that increases Super recharge rate of those around you.

“Ask strange questions. Our questions shape the reality that answers them.” -Lord Timur

Description: Creepy and misunderstood, Timur’s Warlock powers and demeanor almost recall those of a controlling necromancer. Guardians willing to flirt with shadow can take up Timur’s artifact, and transform their melee attack, giving it a chance to turn low-power minions of Darkness into allies. There enemy creatures fight at your side, turning their weapons on confused fellow aliens. Another melee a few seconds later puts them back into their right mind, or the effect expires after 30 seconds.

Buffs / Bonuses: Low chance of making low-powered enemies fight on your side for 30 seconds when you melee them.

There you go! All Iron Lord Artifacts in Destiny: Rise of Iron are yours! 🙂

I hope these tips helped you get all of the Iron Lord Artifacts hidden in the game.

Please check out our other “How To” guides listed at the top of this page to enjoy Destiny: Rise of Iron more!

Huge thanks to PixelPub & Bungie for the guide video and tips.

Please comment if you have any additional Destiny: Rise of Iron Iron Lord Artifacts location tips of your own, we’ll give you credit for it. – Thanks for visiting!