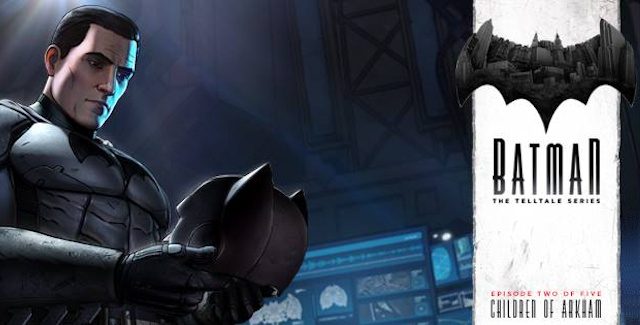 The Batman: The Telltale Series Episode 2 walkthrough for “Episode 2: Children of Arkham” will guide you through the beginning to ending moments of gameplay with strategy tips for this graphic adventure game on the PC, Mac, PS4, Xbox One, PS3, Xbox 360 & Mobile (iOS and Android-based devices).

The full Batman: The Telltale Series Episode 2 walkthrough is livestreamed by me right now!

Please note that viewers must be at least age 18 to watch. Fair warning given because the game includes Extreme Violence described as “Violence towards defenceless people”.

Welcome to the Batman: The Telltale Series Episode 2 walkthrough!

At the top of this page Doug is your voice-over commentator showing you around the game’s chapters. – He makes all the nice-guy choices above. Below you’ll find a more evil playthrough with different choices (with Crowd Play turned on).

Synopsis: As Batman, you’ll encounter classic allies and adversaries, and as Bruce, you’ll learn the true meaning of what it means to be the man behind the cowl. – An old friend becomes a new adversary as Bruce learns more about the Wayne family legacy and Batman escalates the fight against crime and corruption throughout Gotham.

Still reeling from the disturbing revelations regarding his legacy, Bruce plunges into the depths of his memory in search of clarity. This exploration leads to further questions regarding those involved in Gotham’s criminal past. What exactly was Thomas Wayne involved in, and why was he killed? Huge decisions await that will forever change the Batman and the lives of those around him, as he comes into conflict with the enigmatic and formidable Children of Arkham who have dark intentions for the city of Gotham.

The Episode 2 chapter names are:

Alternative playthrough for the full Episode 2:

Overview for all Alternative Choices in Batman: The Telltale Series Episode 2 – “Children of Arkham”:

• Did you ease Falcone’s pain with morphine medication or choose to hurt him?
• Did you try to kiss Selina?
• Did you visit Mayor Hill as Bruce Wayne?
• Did you withdraw your funding from Harvey’s campaign?
• What happens if instead of “Save Catwoman” you chose to “Save Harvey”? (All Episode 2 Ending Choices)

Next Episode: Please join our “Batman: The Telltale Series Episode 2 Episode 3 Release Date” discussion about what will happen in Episode 3.

Thanks to Telltale Games, Doug & GamerZombie for the walkthrough videos.